About a year ago, it would have been hard to believe how 2019 turned out. Worried about a slowing global economy, markets plunged during the fourth quarter of 2018.  After bottoming on Christmas Eve of ‘18, stocks rebounded dramatically in 2019. Led by the dominant technology sector, U.S. stocks regained their footing and surged to record highs.

More impressive was the market rally occurred despite the global slowdown. The fears of a slowdown that caused markets to fall at the end of 2018 were correct. Economies across the globe did slow down. Global economic growth continued to decelerate throughout 2019.  That slow down was also reflected in many of the companies we invest in. As a whole, profit growth for the five hundred companies in the S&P 500 was anemic.

2019 was another poke in the eye to many Wall Street strategists and prognosticators.  As difficult it is to predict the direction of the economy, it is even harder to predict the direction of the stock and bond market.  JP Morgan recently put together an interesting piece that details a group of notable people who have predicted an upcoming crash in equity markets. The list included popular names like economist Nouriel Roubini, Noble prize winner Paul Krugman, and former Regan administration officials  like David Stockman. Not only did they get it wrong, investors would have seen sizable losses if you followed their advice (link to their predictions).

So what does the future hold for the markets? 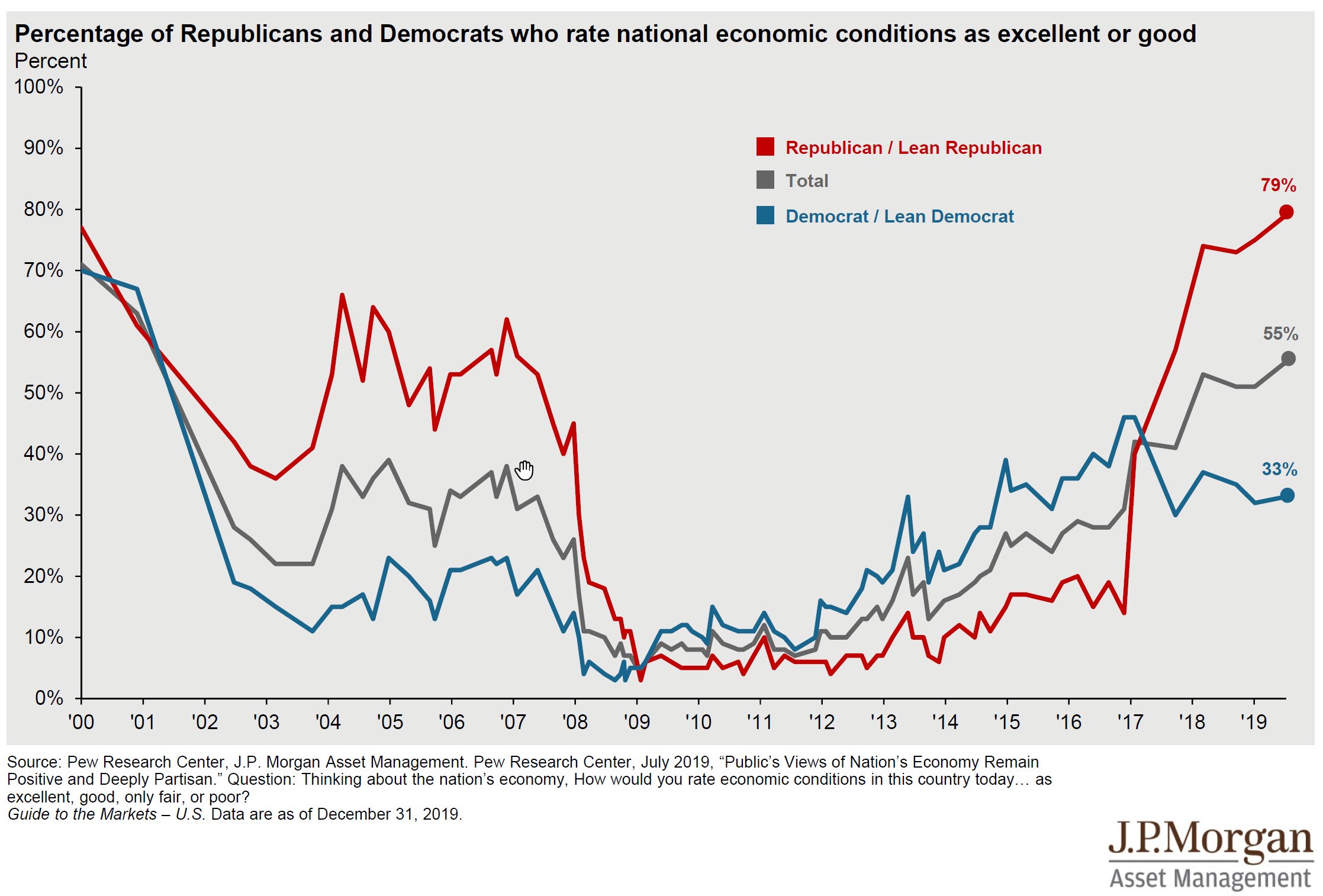 After denouncing some of the brightest names in the world, I would be foolish to stake my claim here.  I think everyone can agree that the future looks decidedly murky. This murkiness leaves many quite unsure about how the economy is really doing.  A recent Pew survey showed that slightly more than half of American’s (55%) thought the economy was doing pretty good. More interestingly their feelings on the economy showed a vast difference depending on their political leanings.  Republicans had a much more upbeat view on the economy compared to Democrats. 77% of Republicans thought that economic conditions were either excellent or good; only 33% of Democrats agreed. Surprisingly, the last time Republicans were more optimistic than their left leaning friends was from about 2000-2008.  So I guess it should be a surprise, that sentiment was the exact opposite during the Obama administration. During much of 2009-2016 period Democrats were more optimistic. The important lesson I take away here is to not let your political opinions interfere with the economic facts.

Unfortunately, the economic facts are decidedly mixed. After the economy slowed down in 2019, recent signs of stabilization are  starting to appear; but the recovery remains weak. Forward looking indicators like the yield curve and leading economic indicators (LEI) are giving us mixed signals.  The LEI has continued to weaken throughout the year. The yield curve however has steepened of late and paints a more optimistic picture. Corporate profit growth has flattened but is expected to start growing again this year.  The expectation of a profit rebounded has buoyed markets in the past few months. I would be surprised to see this momentum continue for the time being.

It’s hard to tell how long the momentum will last.  We continue to stay focused on our investment strategy.  For those technically inclined, we have a strategy for that.  But for most of our clients that have long term goals, we are long term focused.  We are shareholders in the companies that we invest in. Not traders looking to get in and out of a position based on recent trends or the market’s emotions.   We continue to look for companies with a competitive advantage that generate strong cash flows. There are a lot of these companies. We continue to look to buy great companies when they become on sale and offer us a sufficient margin of safety. There are less and less opportunities for us as the market continues to grind higher.  The key to long term success is to be disciplined and not overpay. We have a shopping list of great companies; now we’re just waiting for them to go on sale.