As it turns out, we did not have to wait for earnings week to kick off to get some exciting news. The weekend had plenty to offer for sporting fanatics. On Saturday night, Dustin Poirier beat the favorite of the night Conor McGregor for the second time after a serious leg injury prevented Conor from continuing the fight. This was his third loss out of his last four appearances. On Sunday night, the Bucks beat the Suns closing the Suns’ gap to 2-1 in the NBA finals. Novak Djokovic won Wimbledon and now claims a record-tying 20 Grand Slam victories which he adds to his nine Australian Open, three US Open and two French Open titles; Novak now matches his two rivals Roger Federer and Rafa Nadal for the most majors by a man in tennis history. Italy won the European football championship (Euro 2020) after beating England in a penalty shootout 3-2, this marks Italy’s first win since 1968. And Min Woo Lee won the Scottish Open after making a 10-foot birdie putt on the first hole of a three-way playoff.  I thought to myself after the UFC fight, what are the odds? What are the odds that a fan favorite event would end in anything other than a decision or KO? It can definitely make it a more exciting experience to see an event pan out the way you pictured it. Vegas betting odds showed that Poirier was already the favorite going into the fight. This time around the majority of those taking a side on the fight were correct. In a similar note, going into this week we will see the start of earnings season and I am thinking of the same question, what are the odds?   Last year, banks struggled to make large profits as banks started to pile cash in preparation of an increase in loan defaults. As the economic picture improved in the first half of 2021, banks reversed trend as they started to increase their outlook and are now ready to release their excess reserves. Analysts estimate that banks could report second-quarter earnings that are 40% higher than the same period one year ago. Yet, what analysts will be watching for this season is the trading revenue of the largest investment banks. According to Citigroup and JPMorgan executives, they expect trading revenue to be down 30% or more vs. the same period one year ago. This is a result of the trading boom that helped banks throughout the pandemic. What are the odds that they generate similar revenue?  One issue for banks is the low interest rate environment and low demand for loans such as auto loans and credit cards. A key measure for the industry, net interest margin – a measure of lending profitability – hit a record low in the first quarter, and analysts expect the same for the second quarter. The two images below highlight the large difference in demand for credit. The image on the left highlights how out of trend 2020 was for major banks, while the image on the right highlights the gap that needs to be closed to reach pre-pandemic levels of U.S. consumer borrowing – the black line represents current levels while the colored line is the long-term trend. Still, the S&P 500 Banks index has moved up over 27% in 2021, surpassing the 16% increase for the S&P 500. It appears that the changes banks make to their dividend and buyback programs will dictate the way the industry heads in for the second half of the year. 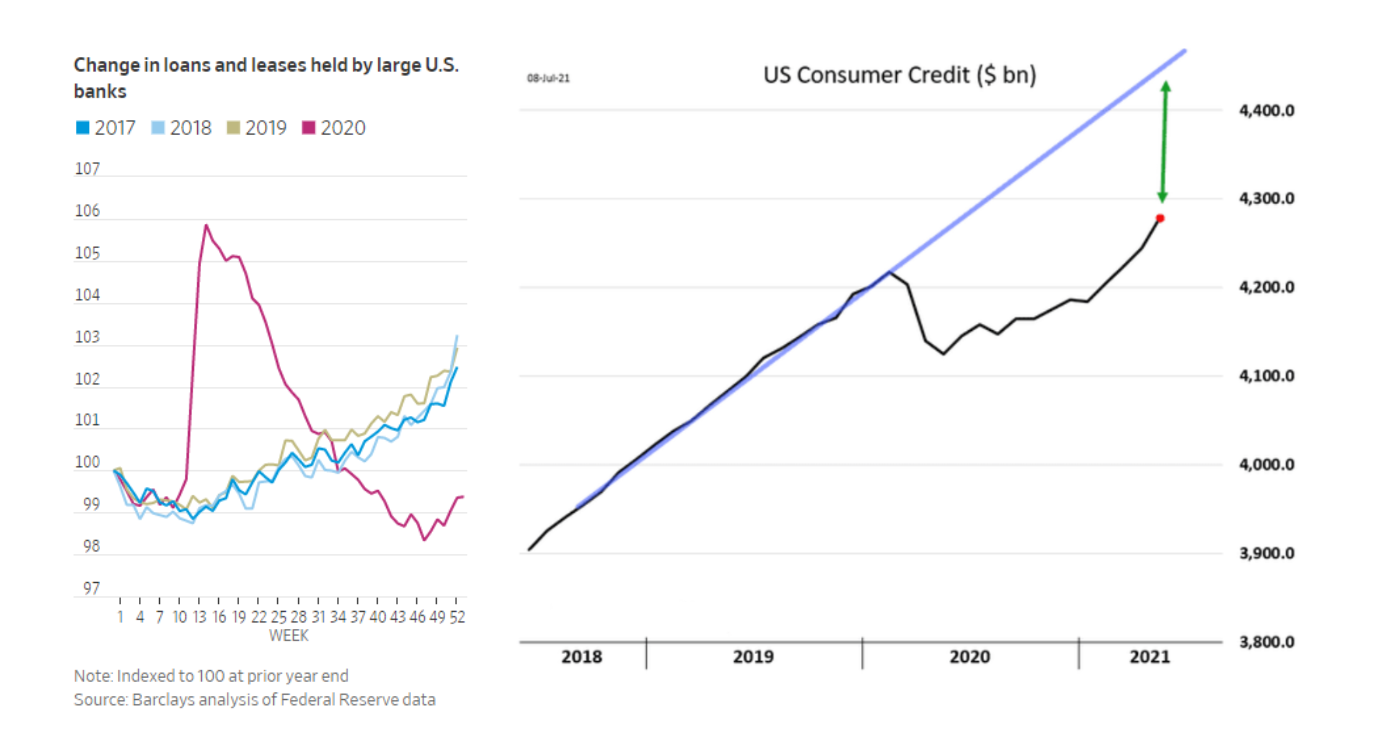 What about the remainder of the industries in the S&P 500? What are the odds that they beat analyst estimates? Analysts predict the S&P 500 will see a price increase of over 11% in the following 12 months. But how accurate are they at predicting the future price? According to Factset, over the past five years, industry analysts have underestimated the price of the S&P 500 by 0.5% on average. And they note that on June 30, 2020, analysts’ price target for the S&P 500 was underestimated by nearly 23% one year ago. So, there are some odds that analyst predictions do not fall in line with actual values. Still, based on earnings growth data from the last five years, it seems likely that the S&P 500 will report earnings growth above 69% for the second quarter, which would mark the highest earnings growth for the S&P 500 in more than 10 years.