It has been a controversial week in the news. New York Governor Andrew Cuomo resigned, a California professor is accused of arson and starting the Dixie Fire, the Senate passed a $1 trillion infrastructure deal by a wide margin (69-30), and the markets were steady. 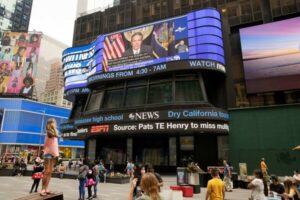 On Tuesday, NY Governor Andrew Cuomo announced his resignation. Cuomo had served in office for over a decade when the state pursued an impeachment inquiry amid sexual harassment allegations. Cuomo had gained national recognition of his handling of the COVID-19 pandemic, but this was quickly overshadowed by allegations of sexually harassing over 11 women. His resignation will become effective in 14 days, and he will then be replaced by Lieutenant Governor Kathy Hochul who will be the first female governor of New York. (Photo source: New York Times | Benjamin Norman)

The Dixie Fire continues to burn in California, making it the second largest fire in California history. Gary Maynard is facing charges of arson in connection with the Dixie Fire. He was seen leaving the area where the fire sparked. Maynard is a former criminal justice professor; he has worked at both Sonoma State as well as Santa Clara Universities. He appeared in federal court on Tuesday and was ordered to remain in custody. Authorities are looking into multiple other fires that occurred during July and August to see if Maynard is connected. As of today, the Dixie Fire has burnt more than 500,000 acres and destroyed more than 1100 structures, including 550 homes. The fire is 30% contained. Our thoughts and prayers go out to all the victims of this tragic fire and we are grateful for the firefighters working tirelessly to contain it.

It’s been a relatively calm week for the equity markets. Since last Friday’s close, both the S&P 500 and the Dow rose 0.5% and 0.8%, respectively, but the Nasdaq had trouble finding ground and fell a slight -0.1%. The major news of the week came from newly released economic data on inflation for the month of July and the Senate passing the infrastructure bill. On Wednesday, it was reported that headline inflation, consumer price index (CPI), for July grew at a rate of 5.4%, matching June’s CPI number. The same day, we also found out core inflation, which excludes volatile items like food and energy, came in at 4.3%, under June’s CPI number of 4.5%. This could mark a turning point for higher prices in light of the previous few months of surging inflation. The Senate passing the $1 trillion infrastructure bill, which would be one of the largest federal investments into roads, bridges, and rails, presents a significant bipartisan milestone. What awaits us now is the next round on Biden’s agenda which is a $3.5 trillion bill to address investment in antipoverty, childcare, family leave, and climate change provisions. House Democrats have stated they could withhold support of the $1 trillion infrastructure bill if the $3.5 trillion bill is not passed in the Senate.

Hope to see you all soon and please let us know if you would like to schedule a review with your Wealth Manager.