As I am sure, like many of you, I will be so happy once everyone is home for the holidays. From the mudslides in Silverado, the tornadoes in the Midwest and Southern states, and an uptick in Covid-19 cases, it will be so nice when everyone is home safe and sound.

On Tuesday, torrential rains triggered multiple mudslides in my hometown of Silverado Canyon and other burn areas. A mandatory evacuation order was issued for the Bond Fire area, including Silverado, Williams, and Modjeska canyons. The first massive storm of the season slammed Southern California with rain, high winds, and mountain snow, leading to growing concerns about mud and debris flows in recent burn areas. By early morning, some mountain and foothill areas had already received as much as 7 inches of rain, while coastal and valley areas had received between 1 and 3 inches, according to the National Weather Service. I appreciate all who reached out, thankfully my family and I were not affected by the mudslides.

Due to a sharp increase in Covid-19 infection rates since Thanksgiving, California announced Monday that beginning Wednesday, December 15th, mask-wearing will become mandatory in all indoor public settings across California regardless of vaccination status. This mandate will remain in place for 1 month until January 15th. This mask mandate will affect all counties across the state although counties like Los Angeles have already had the indoor mask mandate in place. The state will also be tightening up the restrictions for “mega-events” of 1000 people or more. Unvaccinated individuals will now be required to receive a negative Covid-19 test. As of today, the state has not put any mandatory travel restrictions in place but highly recommend getting a Covid test within 3-5 days of traveling to California. 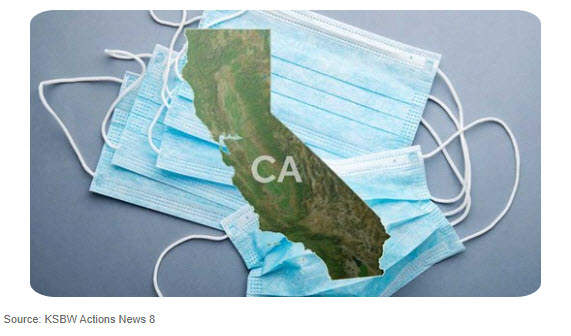 Over the weekend tornadoes ripped through Kentucky and leveled communities. As of today, at least 74 have died, ranging in ages from 2 months to 98 years old. Last Friday and Saturday at least 30 tornadoes struck Kentucky, Illinois, Tennessee, Missouri, and Arkansas. President Joe Biden declared Kentucky in a state of emergency and toured the damage on Wednesday. AccuWeather assesses total damages and economic losses from the tornado around $18 billion, which would make it the costliest tornado in U.S. history

Congress, early Wednesday, voted to raise the nation’s debt limit by $2.5 trillion, officially staving off default and the economic peril that would come if the U.S. were unable to pay its bills. Today, President Joe Biden signed the debt ceiling increase into law. This will ensure that the U.S. will not default on its debt for the first time ever. Senate Majority Leader Chuck Schumer, D-N.Y., said Tuesday the increase is enough to last into 2023, which would allow Congress to avoid any more fights over the debt ceiling until after the 2022 midterm elections. Lawmakers managed to get the measure passed just in time to avoid an economic scare.

The markets fell before Wednesday’s Federal Reserve meeting but recovered afterwards following Federal Chairman Jerome Powell’s remarks. The Fed decided to speed up the tapering process from $15 billion to $30 billion, thereby ending the monthly bond-buying program in March rather than June. As a result, policymakers would be in a better position to raise interest rates sooner rather than later. According to the Fed’s latest economic predictions, rates could rise to 2.0% by the end of 2024. This significant shift was made to address growing prices in the face of strong economic growth. Although they signaled rates may be raised in the future, they will not do so until they have reached maximum employment. As of last Friday, the S&P 500 and Dow Jones Industrial Average are up 0.4% and 1.1%, respectively, while the Nasdaq is down 2.2%, and the 10-year Treasury yield is marginally lower at 1.4%. 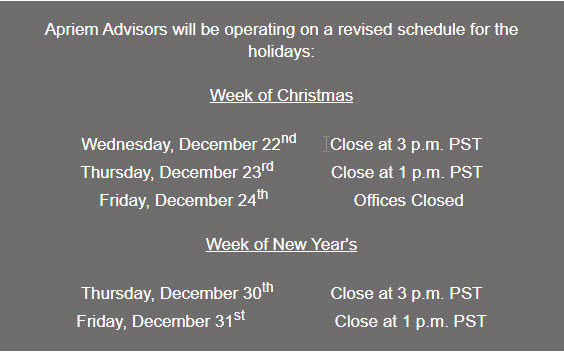 Since our office is under construction, we will not be available for in office meetings, but we will be available to meet in-person at alternate locations, by Zoom, or conference call. We will continue to update you on the progress. We are looking forward for you all to see our newly renovated office space.

With the end of the year quickly approaching, if you have any items you would like to discuss for year-end, such as charitable planning, your Required Minimum Distribution, contributing or opening a retirement account, charitable contributions, gain/loss tax planning or simply review your accounts, please call our office at (888) 253-0288 or email Sunni@apriem.com.

My thoughts and prayers go out to everyone affected by these natural disasters.

Stay safe and have a nice weekend.