I hope you are having a great week and enjoying summer. There is a lot going on in the news with billionaires going to space, the markets grappling for direction, and the saga continues with the newest covid strain, Delta, a variant of concern.

The topic on everyone’s mind is none other than, Delta (Δ), deemed the “fastest and fittest” variant of the coronavirus. It was first identified in India in December 2020, then Great Britain soon after, and is now the dominant strain in the U.S. The Alpha (Α) strain first surfaced in Great Britain, the Beta (Β) strain first appeared in South Africa, the Gamma (Γ) strain first diagnosed in Brazil, and the two Epsilon (Ε) variants first identified in the U.S. The World Health Organization (WHO) established the new naming for the variants in June as an alternative to numerical names. The concerning factor with Delta is that it is 50% more contagious than Alpha and now makes up 83% of sequenced Covid-19 cases across the country. Unvaccinated persons make up 97% of hospitalizations and 99.5% of deaths according to John Hopkins data. Even with the increase, we are well below the peaks reached in January, during a wintertime surge. U.S. and state officials continue to encourage individuals to get vaccinated, especially young adults, to help keep these numbers down. Nonetheless, with covid cases on the rise, some areas are reimplementing mask mandates including Los Angeles County who issued an indoor mask mandate that went into effect last Saturday at 11:59 P.M.

The chart below shows most recent data of tracking coronavirus cases, tests, hospitalizations, and deaths in California as of July 22, 2021. 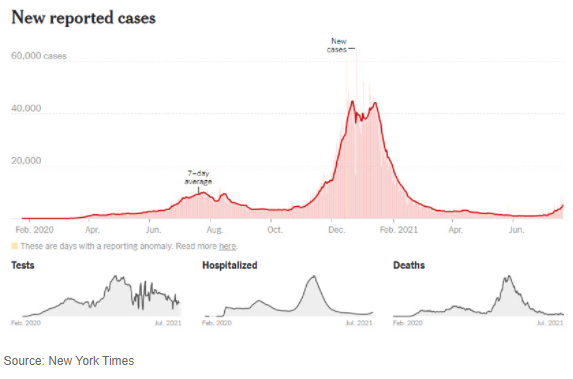 How many billionaires can go to space in one week? As of today, two. Earlier this week, Ben mentioned in his market update that Sir Richard Branson took flight on his Virgin Galactic space craft, Unity 22. The very next day, Amazon’s Jeff Bezos launched into space on Blue Origin’s New Shepard rocket for 10 minutes. Along for the ride was his brother Mark Bezos, Wally Funk (the oldest person in space), and Oliver Daemen (the youngest person in space). This is only the beginning for recreational space travel as SpaceX, Orion Span, and Boeing have announced plans to follow in the jet fuel stream of Virgin Galactic and Blue Origin to take civilians to space. 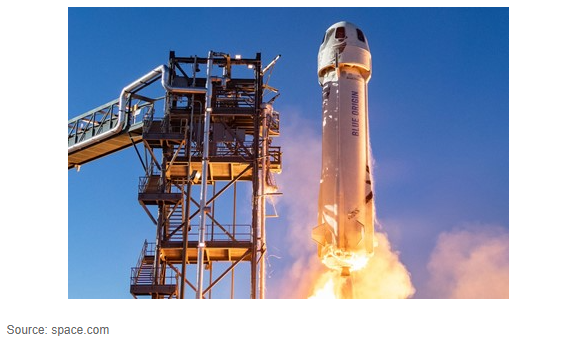