It is all hands-on deck from here on out. Workers at the Ports of Los Angeles and Long Beach are working around the clock to ease the supply chain bottlenecks, Captain Kirk (William Shatner) became the oldest person to go to space in Bezos’ Blue Origin, and the markets started off the week a little rough but have recovered to calmer seas.

President Biden announced yesterday that the Port of L.A. will be operating 24/7 to help ease the bottlenecking of cargo ships. The goal of this plan is to unload 3,500 extra containers a night this week, since there could be as many as half-a-million containers on cargo ships waiting to be offloaded outside the ports of L.A. and Long Beach. The Port of Long Beach begun round the clock operations on Tuesday. Major shippers like Wal-Mart (WMT), FedEx (FDX), UPS (UPS), Samsung (SSNLF), Home Depot (HD) and Target (TGT) agreed to speed up their operations to help clear out the ports. The Biden Administration hopes this “90-day sprint” can be a game changer to unclogging the nation’s supply chains.

Yesterday, William Shatner, 90, became the oldest person to ever reach the edge of space riding in Blue Origin’s New Shephard 4 spacecraft. Shatner is most notably known for playing Captain James T. Kirk from the Star Trek TV Series and films. The commercial flight lasted 10 minutes and included Blue Origins VP of mission and flight operations, Audrey Powers, co-founder of Medidata Solutions, Glen de Vries, and NASA researcher turned tech entrepreneur, Chris Boshuizen. Jeff Bezos was on deck for the sendoff and welcomed them back to Earth. NS-18 is the second human spaceflight that Blue Origin has completed and is planning one more flight this year and several in 2022. 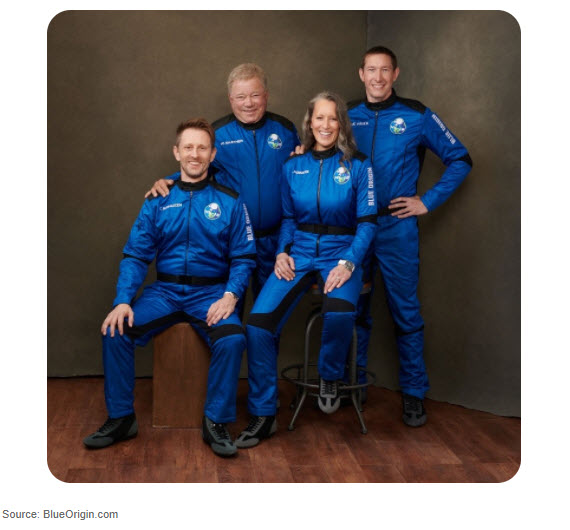 Markets lagged ahead of the CPI data release but recovered throughout the week as earnings season kicked off. Banks announced strong results, which aided in the market’s approaching its previous high. As of last Friday, the S&P 500, Dow Jones Industrial Average, and the Nasdaq were each up 0.9%, 0.5%, and 1.2%, respectively, with the 10-year Treasury marginally lower at 1.5%. The positive returns seen over the last two days led the S&P 500 within 2% of its record high reached in early September. Although U.S. energy companies have not reported earnings yet, those companies share price have benefited from the shortage of energy supply.

Our next virtual webinar is coming up next week on “Explore & Discover Your Living Legacy” with World Vision’s Margo Day. The event is on Wednesday, October 20th at 1 p.m. Click here to register and learn more.

Your 3rd Quarter reports will be uploaded to your client portal or mailed to you by October 15th for you to review. Please call our office at (888) 253-0288 or email Sunni@apriem.com to schedule your quarterly review with your wealth manager.