It’s been a busy week flooded with numerous headlines. President Biden marked his 100th day in office, Johnson & Johnson resumed distribution of their vaccine, CA Governor Newsom faces a possible recall, and the U.S. is playing musical chairs with Congress.

In vaccine news, J&J got the clear from the CDC and FDA to resume use of their coronavirus vaccine in the U.S., after a temporary pause. The two organizations reviewed all available data of J&J’s vaccine; known and potential benefits outweigh any known and potential risks. The CDC also announced that fully vaccinated people can be maskless outside except when in crowds. With J&J back in the mix, the United States is shipping their supply of nearly 60 million AstraZeneca’s coronavirus vaccines to India. The country, home to 1.3 billion, is combating a surge of coronavirus infections reporting about 300,000 cases a day for the last 6 days.

On Monday, the U.S. Census Bureau released the population counts from the 2020 Census and how this will affect Congressional Apportionment. The resident population of the United States, including the 50 states and the District of Columbia, was 331,449,281 as of April 1, 2020. This is an increase of 7.4% since the last Census in 2019. Based on the apportionment calculations in the 2020 Census Texas, Colorado, Florida, Montana, North Carolina, and Oregon will gain seats, while California, Illinois, Michigan, New York, Ohio, Pennsylvania, and West Virginia will lose seats. 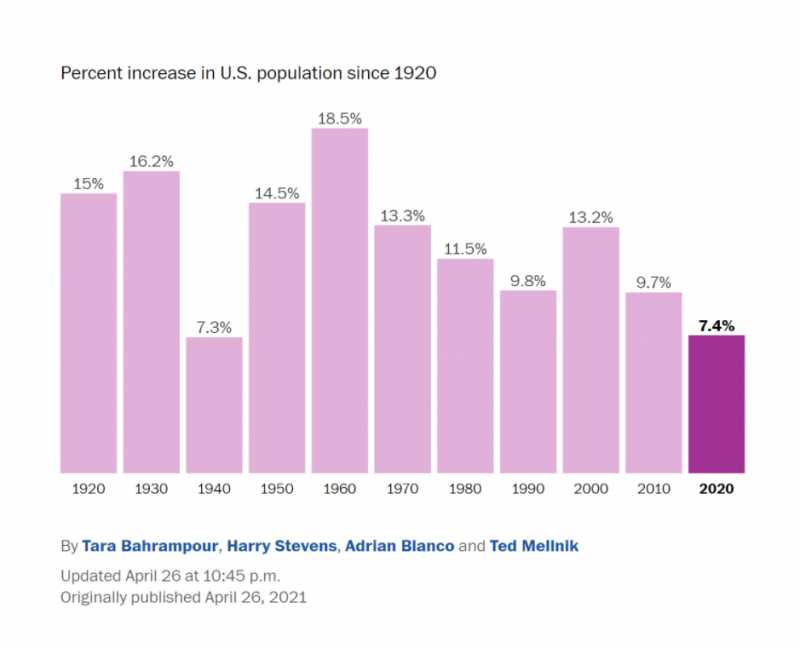 Earlier this week, the recall effort against California Gov. Gavin Newsom collected enough valid signatures to likely trigger a recall election. The second such election in state history. The last recall election was in 2003 when Gov. Gray Davis was recalled and replaced by Arnold Schwarzenegger. There is no date for the election yet, but it will most likely be this fall. Potential candidates include former Olympian and reality TV star, Caitlyn Jenner, former San Diego Mayor Kevin Faulconer, former CA congressman, Rep. Doug Ose, and several other individuals.

In the wake of multiple major events, markets have had a relatively quiet week so far. Since last Friday’s close, the S&P 500 is up 0.7%, the Nasdaq is up 0.5%, and the Dow is flat. It seems investors are still digesting the information overload (big tech earnings, GDP growth, Fed meeting, etc.). Looking towards earnings, this season has been a flurry of mixed results and reactions to those results. In one case, we have Google’s parent company, Alphabet (GOOGL), and Facebook (FB) reporting stellar first quarter earnings and investors rewarded them with high single-digit returns (over 6% and 7%, respectively). This is not to say other big tech firms didn’t have positive earnings results, because they did, but investors weren’t sold. Apple (AAPL) and Microsoft (MSFT) both beat estimates, but shares fell despite this.

Last night, on his 100th day in office, President Biden made his first address to a joint session of Congress. History was made, with Vice President Kamala Harris and Speaker of the House Nancy Pelosi, being the first two women to lead Senate and House during a presidential address to Congress.

As always, please call our office at (888) 253-02888 or email Sunni Allen at Sunni@apriem.com to schedule a review of your portfolio.