June is traditionally known as the beginning of summer, but many refer to it as June gloom. The first ten days so far have not disappointed. We have had rain along with many days of dark, cloudy skies, but not all is gloomy in the news this week. There are many uplifting stories filling the headlines, from Jeff Bezos of Amazon lifting off into space to Lockheed Martin winning a billion-dollar Space Force contract. The CDC is lifting travel restrictions, the U.S. has recovered most of the ransom pipeline money and the markets continue an upward trend for 2021.

In other out-of-this world news, NASA is launching two new spacecrafts that will be heading to Venus between 2028-2030. Lockheed Martin will design, build, and operate both spacecrafts. This will be the first Venus-bound mission from the U.S. since NASA’s Magellan radar mapping mission launched in 1989. Their aim is to explore our possibly once inhabited sister planet. In addition, Lockheed Martin recently won a five-year $1 billion contract to help manage the logistics of operating missile-detection satellites they built for the U.S. military five years ago.

Jeff Bezos, CEO of Amazon, will ride aboard Blue Origin’s (Bezos’ Aerospace Manufacturer and Sub-Orbital Space Flight Company) spacecraft, New Shepard, on its first crewed flight to space. Bezos plans to blast off on July 20th shortly after he steps down from his position as CEO to executive board chairman. Accompanying him on his travels will be his brother and best friend, Mark Bezos. 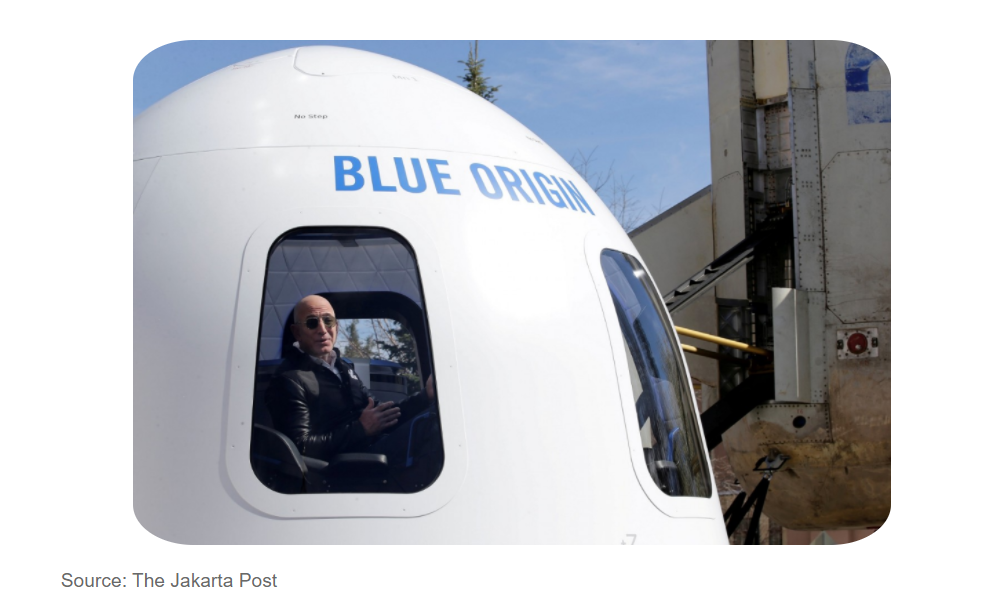 Earlier this week, the CDC announced that they are easing travel recommendations for more than 110 countries, including Japan. As of Monday, 63 countries were lowered to a “Level 3” rating, including France, Canada, Mexico, and Italy. Another 50 countries and territories including, Singapore, Israel, and Iceland, have been lowered to “Level 2” or “Level 1”. The United States’ rating was revised from a “Level 4” (the highest) to a “Level 3”. On May 24th, the U.S. State Department urged against travel to Tokyo after citing a new wave of Covid cases before the Olympic games begin on July 23rd. These new State Department warnings raised concern and the White House responded by reaffirming its support for the Tokyo Games and the U.S. athletes that will be competing. Foreign spectators are banned from attending and the Olympic committee will decide later this month on domestic spectators.

This week, the Justice Department announced that it recovered nearly half of the ransom that was paid by Colonial to the hackers. The cyberattack shut down the country’s largest fuel pipeline and caused gas shortages across the eastern United States. Colonial Pipeline paid roughly $4.3 million in bitcoin to the hacking group to regain control of their operations.

It’s been a relatively mixed week for the equity markets so far. Since last Friday’s close, the Nasdaq is leading the pack up 1.4%, the S&P 500 is up slightly 0.2%, and the Dow is down -0.8%. The major economic news of the week comes from today’s inflation reading, clocking in at 5%, one of the highest readings since 2008. Investors, however, were not deterred. Some of this could be attributed to the data itself having more temporary trends, like gas prices or used car prices getting boosted by lower supply of new cars, or perhaps investors are expecting inflation to calm over time. In other news, this week marked a significant milestone for Alzheimer’s patients as Biogen’s drug, Aduhelm, became the first FDA approved treatment meant to slow the progression for those afflicted with Alzheimer’s. Shortly following the FDA’s groundbreaking announcement Monday morning, Biogen’s (BIIB) stock jumped nearly 50%.

If you haven’t already, please sign up for our next webinar on Providing for a Surviving Spouse in Retirement with guest speaker, Jim Foster, CFP®, CLU®, from Prudential. It will take place on Wednesday, June 30th at 1 PM. Click here to register and learn more.

For those of you who are comfortable meeting in person, we will begin offering in-person meetings at our Irvine office starting July 1st. We look forward to having clients in the office again. Please call our office at (888) 253-0288 or email Sunni at Sunni@apriem.com to schedule your in-person meeting or virtual meeting with your Wealth Manager.