Q1 2019 set yet another milestone after U.S. stocks posted the highest quarterly return since 2009. Yes, the market has been great, but the new milestones – good and bad – are starting to add up. On top of the record-setting quarter, we saw the yield curve invert for the first time since 2007, as well as some immense pullbacks in economic data, which haven’t been seen in years. If I had a dollar for every time I heard a financial pundit state, “this is the best/worst __ since __ ,” I’d hand over a few million dollars to Apriem and retire! Maybe that’s a little dramatic, but you get the point.

With all this conflicting data and information, it’s vital to differentiate between the signal and the noise, or in other words: figure out what matters and what’s simply there as click bait. While it is important to understand the past, as it often holds implications for the future, the market does not move based on what it already knows. It moves based on what it expects, and those expectations never end. They frequently change, often causing the market’s erratic day-to-day movements. Knowing this, when we analyze the markets and make investment decisions, we place a large emphasis on a few key measures that give us a solid gauge of the market’s forward-looking fundamentals and investors’ sentiment.

One of these key measures we’d like to highlight is the S&P 500’s forward price-to-earnings ratio, also known as P/E ratio. This ratio measures the amount an investor must pay (the P in the ratio) for $1 of earnings expected to be generated by all 500 companies in the S&P 500 (the E in the ratio). Just like you use comparable sales of similar properties to buy or sell a house, this ratio can be used to assess the general pricing level of the markets. If the ratio is high relative to historic levels, the market is considered expensive. If it is low relative to historic levels the market is considered cheap. 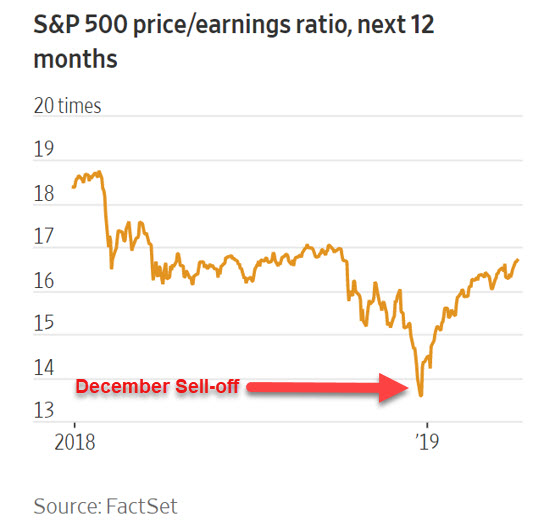 If you’re wondering ‘why not put me in when it’s cheap and sell me out when it’s expensive?’ unfortunately, it is not that simple. Sometimes high P/Es are a good thing, because the market is expecting earnings growth to rise, which generally coincides with a strong economy, so investors are charging a high price for exposure to that expected growth. The same can be said for the other side of the coin. Low P/Es often signify that earnings growth is expected to drop, which could mean a recession is on the horizon, leading investors to sell at lower prices. In other times, P/E ratios can run wild, driven purely by emotion and unjustified by the underlying earnings growth, as we saw in 2000 and 2008. Today, the S&P 500 looks fairly valued at a forward P/E ratio of about 16.8, which is in line with the historic average. However, it is important to note that the P/E ratio has risen sharply since the end-of-year decline and is on track to move to a 52-week high. Remember, this was the best quarter for U.S. stocks since 2009. We can attribute some of the rise to our belief that the December sell-off was likely overdone, but the higher ratio also implies that the market expects earnings to grow and the economy to reignite itself. Thus far, we’ve seen Q1 profit growth come in short of expectations, which leads us to be a bit uncertain of the road ahead; however, we remain optimistic. Given the big move in the S&P 500 since the start of the year and the resulting increase in the index’s P/E ratio, we need 2019 profit growth to come in strong in order to sustain these levels and move higher.

When looking to the bond markets for guidance, equity investors are having a hard time finding reassurance in this narrative. The first inversion of the yield curve since 2007, which we witnessed in March, suggests bond investors expect growth and inflation to cool, as they are willing to purchase longer-term bonds at lower interest rates. Normally, longer-term bonds should offer higher interest rates, to compensate investors for having their money locked up and to preserve their purchasing power, as economic growth and inflation generally rise in the future. The inversion of the curve is often cited as an early recession indicator, but it is important to pay attention to the length of time it stays inverted to determine the significance. This quarter, we saw an inversion that only lasted a couple days, which has hardly provided any evidence of an impending recession. For the yield curve indicator to work, the rates on short-term bonds must supersede those of their long-term counterparts for a full quarter. In fact, the last time the yield curve inverted over a similarly short timeframe, the S&P 500 spiked by 50 percent! This was in 1998, which was a much different market and economic environment, so by no means are we saying this will happen again. The general point is that it does not mean that blood is going to be spilled, like the media often implies. Again, separate the signal from the noise. While we acknowledge the message being sent by the bond markets, and after factoring in the S&P 500’s weak Q1 profit growth, we are taking the side of the equity markets, as we remain confident in corporate America’s profit outlook and the U.S. economy. This has led us to increase our allocation to U.S. equity markets for all client portfolios. 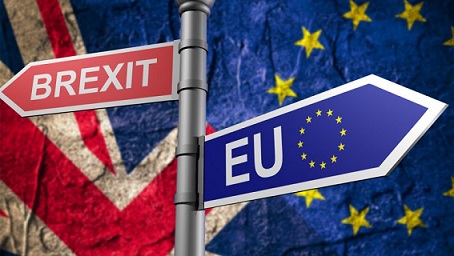 If you thought the situation at home was tricky, take a trip across the Atlantic and you’ll really get your head spun. Developed markets in Europe and Asia returned 10 percent this past quarter, despite those economies’ continued woes and the growing level of political uncertainty felt throughout Europe. It is no secret that the Eurozone economy has had trouble keeping up with the U.S., but Europe is starting to send signals that it may be facing something worse than slower growth. One well-known indicator we often cite, the ISM Manufacturing Purchasing Managers Index, which measures the direction of manufacturing activity for a given economy, fell at its fastest rate in more than six years and now sits in recessionary territory. On top of the economic concerns, the back and forth debate between the U.K. and EU over Brexit negotiations continues to cause uncertainty. Due to the fading economy and the poor level of consumer and business sentiment felt across the continent, the European Central Bank pledged to keep interest rates lower for longer, to reverse course and get the economy back on track. It seems that equity markets took a liking to this move, and we feel this was the chief cause of this quarter’s impressive return. Just like in the U.S., the international bond markets are singing a different tune. Longer-term interest rates fell into negative territory in Germany and Italy, two of the region’s most influential economies. This can be interpreted in the same manner as the inversion of the yield curve here at home. International bond investors are expecting a weaker Eurozone economy going forward. Conversely to our stance in the U.S., in Europe we are siding with the bond markets. Record low interest rates throughout the Eurozone have done little to stimulate economic growth, and we believe keeping them lower for longer is simply a Band-Aid fix to a bigger problem. Based on this assessment, we are staying out of developed international markets at this time. However, please keep in mind things can turn quickly, so our positioning is always subject to change.

As global investors, we look to developing economies for investment opportunities, which sometimes offer the best prospects for growth in client portfolios. While developed international markets look weak, their younger, emergent counterparts such as China, Taiwan and India offer some compelling opportunities for investment. Let’s focus on China, which represents about one-third of the total emerging market complex. Much has been discussed about a slowdown in China, as the country transitions from a manufacturing-focused economy to a more service-oriented one. When digging into the numbers, we believe these concerns are likely overblown. Last year’s GDP growth did come in at a 28-year low, but the headline number does not tell the full story. When calculating year-over-year growth rates, it is important to remember that the level of GDP in the current year is measured against the level from the previous one, so over time as an economy gets larger and larger, its GDP growth is being measured against a bigger number. GDP growth will always naturally slow down for any economy as it gets larger and it does not mean a crisis is ahead. A recent McKinsey report estimated that China will, “add the equivalent of the entire Australian economy to its GDP this year.” As the second largest economy in the world, the country has channels for growth spread across the globe. Given our optimism toward China and its large influence on the emerging markets, coupled with the relative strength of other countries such as Taiwan and India, we will maintain our current allocation to emerging markets for all client portfolios.

All in all, Q1 was a great quarter for investors globally. Despite the concerns, there are still plenty of reasons to remain optimistic. We would like to remind you that investing is largely an emotional game. As human beings, we all exhibit a wide range of varying emotions day in and day out. While it is not possible to completely control our emotions, we can take steps to limit the role they play in our financial lives. One way to do this is to consistently talk with our loved ones about the importance of staying invested and sticking to the plan. When we invest for a purpose, we are ever more likely to stay the course.