Market Update: When Bad is Good

Market Update: When Bad is Good

June capped off a roller coaster ride for equity markets. After last year’s late declines, the S&P 500 is up over 18% in the first six months of this year. But it isn’t just the S&P 500 that’s moved higher, many other markets have experienced large rallies as well. European stocks have risen sharply, and bond prices have soared, with high quality bonds like U.S. Treasuries and more speculative lower quality bonds all seeing nice gains. This is a stunning turn from last year’s late decline. However, if you look over the past eighteen months, from January 2018 thru June 2019, the story looks quite a bit different. During this period, there have been five drops of more than 5%, with a 10% drop in January 2018 and 20% correction late last year. Just like a wild roller coaster, we have gone through several twists and turns, with one or two loops in between, which has led us to finish right where we started. As it stands, the S&P 500 is up roughly 2.5% from the January 2018 highs to the end of June 2019.

This year’s rally is interesting given the noise coming from D.C, where trade concerns have surged higher and weighed on the global economy. One of the primary drivers of this year’s rally has been hopes for an interest rate cut by the U.S. Federal Reserve. Many refer to this as an “insurance cut”, to protect the economy from the economic uncertainty surrounding the trade war. After taking in various data points, it’s become clear that the U.S. economy has been negatively impacted by the current and projected tariffs. This doesn’t necessarily mean we are headed for a recession, but the risk of a slowdown has given the markets enough juice to start pricing in a rate cut. With these expectations comes an interesting paradox. As weaker data sprinkles in, markets have moved higher, in anticipation that a potential slowdown may lead to one or more rate cuts, which would ultimately stimulate the economy. With these expectations building up steam, many investors have piled into the mantra, “bad news is good news”. 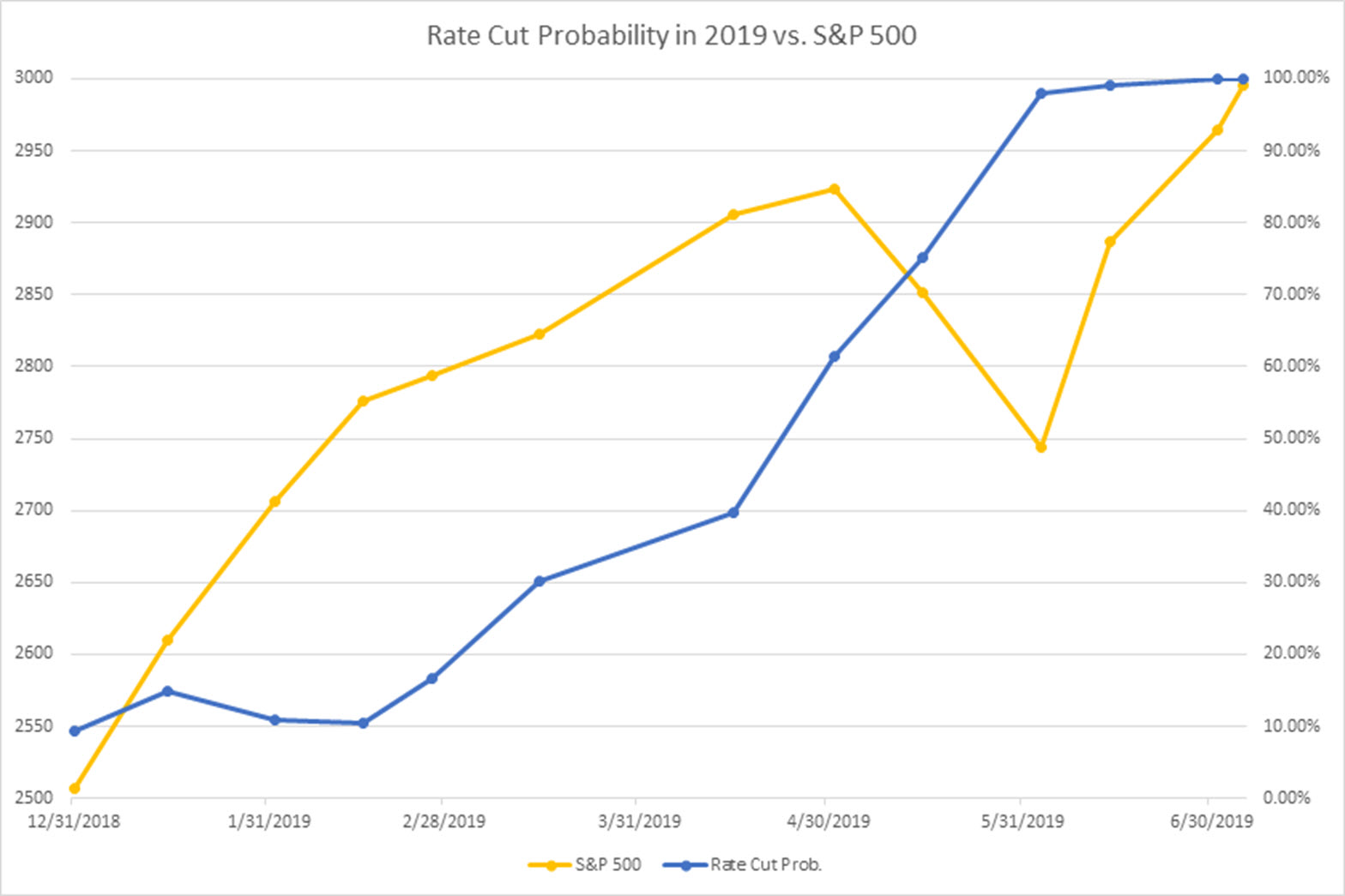 This phenomenon really took off during the month of May, when trade tensions and global economic weakness reached a climax. After a rough month of May, the incessant call for a rate cut turned into a very likely possibility, as the probability finished the month right below 100%. This triggered a quick reversal in stocks and sent the S&P 500 to an all-time high. To illustrate this point, see below for the strong correlation between the market’s implied probability of at least one rate cut in 2019 (The vertical column on the right) and the rise in the S&P 500 (The vertical column on the left).

At this point, the market is confidently pricing in a total of three-quarter point rate cuts, a far cry from the initial call for one “insurance cut”. Many would interpret this as a sure sign of a weak economy. However, this comes amid a record low unemployment rate and an all-time high in consumer confidence. Personally, I can’t remember a time when there was so much uncertainty facing the markets. Either the market is right, and the economy is much weaker than we all think, or the market is wrong. In either case, we expect continued fluctuations in the market, as investors respond to the statements and decisions made by the Fed.

At Apriem, we continue to maintain our position that the market is overreacting to trade tensions and is underestimating the strength of the U.S. economy. Our longer-term expectations remain optimistic, as we have strong conviction in our belief that the weakness in economic data will rollover and the Fed will keep rates higher than what the market expects. Given this position, we have decided to cautiously enter back into the equity markets, as we still think the market has room to run. It is important to note that this decision comes with our expectation that a short-term reversal may occur if the Fed disappoints the markets. The bad news may have fueled this rally, but it simply can’t sustain it.