Four times a year, shortly after the end of every quarter, we enter into the Wall Street earning season.  Companies give us a glimpse into their business for the last three months, and an update on on their projections for the future.  “Earnings” is a fancy word for profits.  “Earnings Season” is just “Profit Season”. Unfortunately, profits will not be the center of attention this quarter.

The COVID-19 shutdowns only meaningfully hit the economy late last quarter, around mid-March.  This means that many of these companies results for last quarter will come with a big asterisk.  Regardless, the earnings picture is still looking bleak.  Estimates from various analysts are expecting profits to drop by about 10% for major American companies in the first quarter.  No surprise that companies in the energy (think oil and gas) and consumer discretionary (think of of the stores in your local mall) sectors are expected to be hit hard from this economic storm.  Current estimates are for profits to drop another 20% in the current (second) quarter and stay weak throughout the remainder of the calendar year.  Ugly numbers.

The silver lining in this story is that the stock market usually bottoms before earnings.  In the last few earnings declines, the S&P 500 started moving higher as earnings continued to deteriorate.  In the Great Financial Crisis, equity markets bottomed in March of 2009, but earnings didn’t start increasing until September, six months later.  Same pattern in 2015-2016.  The S&P 500 bottomed in late 2015, while earnings continued to decline for the next six months.  The market almost always looks to the future, not the past.

During this crisis, less attention will be paid to “profits”.  Many companies are in survival mode.  We’ll be looking for what management has to say about how they can weather this storm.  How they are looking from a liquidity and balance sheet standpoint.  A few companies have already cut their dividends. Big names like Boeing, Ford, and Carnival Cruise Lines are among the companies that have eliminated their dividends to preserve their precious cash.  Who could be next? Many companies are in survival mode.  This quarter isn’t “earnings season,” it’s “liquidity season”.

So far, only a handful of companies have reported.  Banks kicked things off, as they are always the first sector to report.  Big names like JP Morgan, Wells Fargo, Citi, and Bank of America have reported ugly numbers, mostly around their consumer divisions.  They haven’t seen any major losses, but they’re setting aside some cash because they expect losses in their credit card and lending arms.  No surprise there.  The top five banks have set aside almost $25 billion in loan loss reserves (see below), the most since 2008.  That number will likely continue to rise for the next few quarters, but thankfully banks seem stronger (better capitalized, lower leveraged) than they were in 2008. 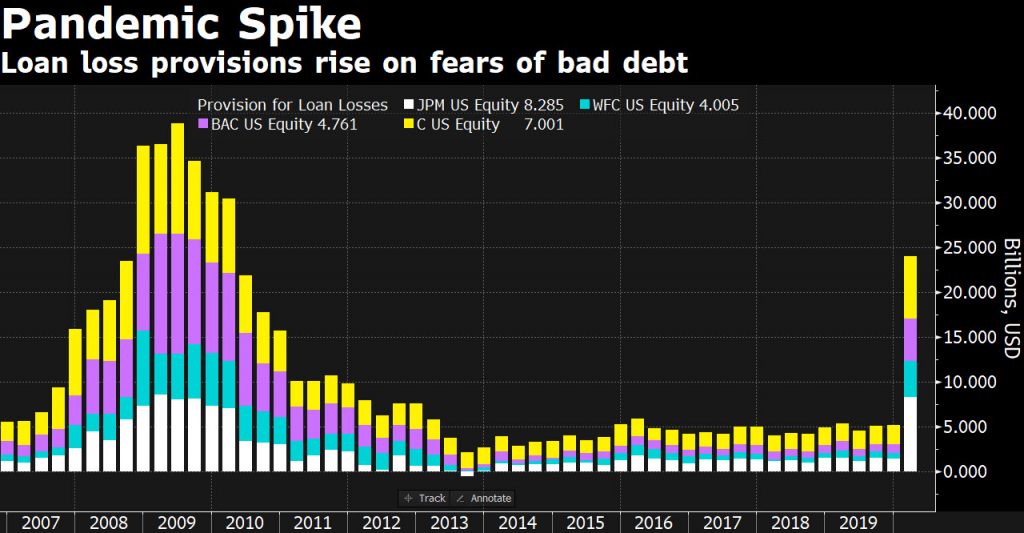 During this “liquidity” season, we will continue to monitor our core holdings for any surprises.  We’ll be paying close attention to how the companies we invest in are weathering this storm.  Profitability will be important, but we’ll also be focusing our attention on other metrics like the company’s cash flow, liquidity, and operating margin.  The companies we own have shown a great long-term consistency in the way they run their business.  While this storm is severe, we continue to think it is temporary.  Hopefully, businesses will open back up in the next few months, not years.  Since our time frame for all of our investments is measured in years, not months, we continue to look for companies that have great long-term track records.  Like many crises in the past, Americans will power America through this.

Please feel free to reach out to us with any questions or concerns.  We’re here to serve.