If a question mark were able to manifest itself, I think it would take the shape of the equity market this week. I mean there have been several events that it just seemed the market didn’t know how to react, and the S&P ultimately ended up roughly half a percent for the week. Over the weekend, President Trump issued four executive orders on Saturday in reaction to the Congressional stalemate. During the week, Russia registered the first coronavirus vaccine, albeit the amount of skepticism regarding its efficacy is quite high, presidential candidate Joe Biden announced Sen. Kamala Harris as his running mate, and jobless claims continued its downward trend for the second week. Certainly, that last point could be interpreted as one positive signal for the economy, but stocks barely reacted Thursday (in fact, it fell less than a quarter of a percent!). So, what seems to be keeping the markets muted is the uncertainty in Congress to come to an agreement on the next stimulus bill. In the beginning of the week, it looked like Trump’s actions over the weekend would’ve fast-tracked stimulus talks, which is what many analysts and economists had expected, but as the week progressed it became more clear that this wasn’t happening.

So, lets focus on the primary tangible news this week. For now, that happens to be the four executive actions taken to extend some relief that the CARES Act provided. The first was to extend the jobless benefits to the end of the year with $400 in additional benefits (halfway between what the Democrats and Republicans expressed in their packages), but states would have to raise 25% of it. Clearly, states are facing huge budget pressures right now, and it was later revealed the states will not be required to raise it. So, for many states the additional benefits could be as low as $300 (half of the initial jobless aid). The second was a payroll tax deduction on Social Security taxes through December 31st, but if the deferrals aren’t forgiven, we could be seeing a delayed impact on our 2021 taxes. The third was aimed toward eviction protections by directing the Treasury to try to appropriate funds to assist renters and homeowners, but this wouldn’t extend the eviction moratorium (federal ban on evictions) set from the CARES Act. The fourth would extend student-loan payment moratorium and zero interest until the end of the pandemic. The primary concern is the funds being used to finance some of the executive actions won’t last through the end of the year. As such, a lot of expectations are on Congress to come up with a solution, frankly as of yesterday.

As Congress continues to hash out a deal, Trump’s measures over the weekend will likely gain him a lot of favor in the coming election. Inevitably putting more pressure on Biden’s campaign. Of the four executive actions taken over the weekend, ones getting the most coverage seem to be the jobless benefits extension and the payroll tax cuts. In fact, on Wednesday, Trump was quoted multiple times saying that he would push to eliminate the payroll tax if reelected. Interestingly enough, while Trump has been pushing to eliminate the payroll tax, Biden’s tax plan takes the opposite measure and pushes for a payroll tax hike/adjustment.

One common theme among Democratic tax plans has been to tax the very wealthy and large corporations. Biden’s tax plans certainly didn’t stray very far from this ideal. If some of you recall, Biden released his tax plans toward the end of last year with headlines outlining overall taxes on high-net-worth individuals and corporations. Let’s take a more granular look at his plan to see what the possible implications are. Biden’s plan is based on a ten-year time horizon aimed at raising $3.4 trillion in tax revenue to fund health care, education, green initiatives, and infrastructure. The largest portion ($800B) involves revisions to capital gains taxes that would look to remove the lower rates of long-term capital gains (0%, 15%, & 20%) and replace them with regular income taxes for individuals who have an annual salary of $1 million or more. Biden’s plan also looks to remove the step-up in basis which allows deceased individuals to pass capital gains to their heirs without taxation (essentially resetting the cost basis for the inheritor). The last tax on wealthy individuals is a cap on itemized deductions to 28% of the value (those with tax rates higher than 28% will face limitations). The second largest portion ($730B) of the plan involves raising the corporate income tax rate from 21% to 28%. In addition to the corporate tax rate, corporations would also see a corporate minimum tax of 15%, and a doubling in the tax rate of foreign profits (from 10.5% to 21%). 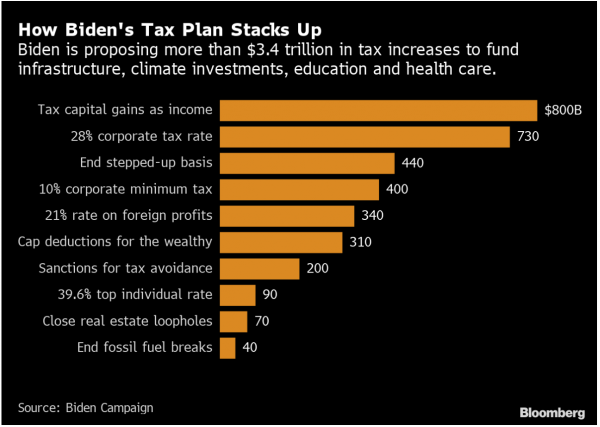 While Biden’s tax plans for capital gains appears concerning at first glance for any investor, the group that it involves is a very small portion of the population (+$1 million earners). His plan for income taxes would also only make changes to individuals making more than $400k a year, and would only slightly bump the top rate from 37% to 39.6% (much smaller than former presidential candidate Bernie’s top rate of 56%). Of course, if Biden wins the election, rarely does a presidential candidate’s plan get approved in the same form it was proposed. So we can expect further revisions to Biden’s tax plans, especially as the pandemic progresses.

For now, all we can do is wait and see how Congress rolls out CARES Act part 2, and hopefully it’s soon. While they may be in short supply, we continue to monitor the current landscape for any undervalued opportunities. Also, this week was the conclusion of our Portfolio Construction Webinar series. We have recordings available on our website for playback. As always if you have any questions, please don’t hesitate to contact your wealth manager or the office.