After a relatively cool summer, over the past week, the weather got rather toasty here in Southern California. Death Valley hit 130 degrees, one of the hottest temperatures ever recorded on earth. Thankfully, we live in south Orange County where it’s much cooler. My family is an SDG&E customer, so we were warned about the potential for rolling blackouts. Luckily enough, we didn’t have any power issues but some of my neighbors weren’t so lucky. Last week was also the first week of “school” for my kids. Since everything is online right now, I could not imagine online schooling without power or internet.

Not to be outdone, the stock market also had a record setting week. The S&P 500 hit a record high last week, surpassing the market’s pre-COVID levels. As we have discussed before, much of the gain has been led by five massive technology companies. The leader of the pack right now has been Apple. After clearing the $1 trillion market capitalization level, Apple hit $2 trillion in value this week, another historic record.

Two trillion! What an eye watering number that is still hard to wrap my head around. To put that into perspective, let’s look at other large companies. Walmart, a giant of its own, has a market capitalization of under $400 billion. Apple gained about $400 billion or the market cap of Walmart in the month of August alone. And August isn’t even over yet. While no one can argue that Apple hasn’t been hit by COVID, like the hospitality industry, Apple hasn’t seen much growth either. In the past year, the company’s revenues and profits are up around 5-10% respectively. Shares have exploded higher and now trade at a 200-300% higher valuation. From numerous angles (revenues, profitability, and cash flow generation) Apple’s valuation has surged recently to levels not seen in years. 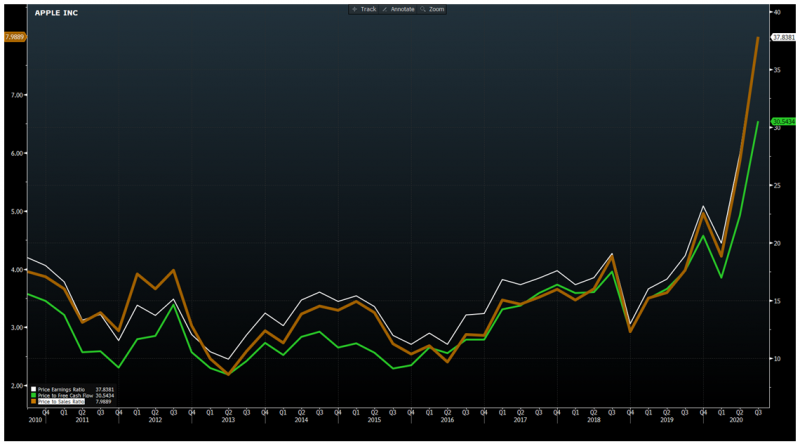 The strong market is leading to a surge in private companies looking for new capital. Often through an initial public offering, or IPO. The Chinese fintech power, Ant, has been rumored to be pursuing a listing in Asia. Other companies like Airbnb and the secretive Palantier have secretly filed to pursue “direct listings” in America. The frenzy over IPOs has caused two recent trends, and direct listings are one of them. They differ from the traditional IPO in that the investment banks like Goldman Sachs, Morgan Stanley or Bank of America play a much smaller role and take a much smaller cut from the proceeds (banks usually take about 4-7% cut from traditional IPOs ). Why hire a bank to drum up some hype when there is already plenty of hype in a name like Airbnb.

The second trend in IPOs has been the “special purpose acquisition company” or blank check IPOs. These SPACs are essentially shell companies with no real business, yet. The people behind these SPACs or the “sponsor” raises money by listing their shares to the public. They must use that cash within two years to buy a business. Recent hot companies like Virgin Galactic and Nikola Motors have been examples of SPACs. While not a new structure, they have become in vogue recently, raising a record $12 billion halfway through the year. Hedge fund bad boy, Bill Ackman, raised a few billion in one of these.

A lot of trust must go into these sponsors. Giving them a blank check is a scary proposition. There are now over twenty-one SPACs on the market that are searching for targets that must be completed before the end of the year. On top of that there are another dozen or so more looking for deals with a different timeline. That rushed timeline could cause some SPACs to overpay for second rate investment opportunities.

While the sexiness of these IPOs and SPACs are enticing, we at Apriem continue to look for opportunities with specific criteria. We prefer companies that have a durable business model and a proven track record of success. No doubt that there are some great businesses coming to market in the next few months. There are probably a few names that could be the next powerhouse in their industry. But for now, we will wait on the sidelines and watch these new companies establish themselves. Many of them are still unprofitable and burn through cash. Until they can sustain themselves, we opt to avoid.

—
Tesla is another name making headlines. Already surpassing the value of other (larger) automakers, Tesla’s market cap is also just under $400 billion. When you look at the two companies from a profitability standpoint, Walmart made nearly $15 billion in profit over the last year. Tesla made less than $500 million.