Last week, the Federal Reserve Bank of Kansas held its annual monetary policy symposium. However, for the first time since it began in 1978, the Jackson Hole conference wasn’t held at Jackson Hole. It was instead hosted virtually. But that certainly was not the biggest news as Fed Chair Powell announced a major change to one of the Fed’s dual mandates. Specifically, how it will maintain its inflation target. Or in this case, how it won’t.

The Fed’s new norm for inflation abandons its strict process to target that norm. At last week’s conference, Powell announced that the Fed would shift its priorities from preemptively raising rates to stave off inflation to one that accommodates for periods of inflation that run higher than its 2% target. The goal is for inflation to have a long-run average of 2%. In theory, periods of inflation higher than 2% would offset periods of inflation below 2%. Why this is all happening now is because of, you guessed it, the pandemic. While officials had hinted of this new approach to inflation targeting before, the conference was expected to lay down the reasoning and the framework for these changes. So, a fair assumption is that the Fed’s plan for a rate hike has likely just been prolonged to an even further date (and could be even longer depending on how long inflation stays below 2%). Holding the rates steady now would support unemployed persons looking for work, consumers paying off debt, and people looking to purchase or refinance their homes. It would also give the Fed more flexibility on monetary policy going forward, and we could see more specifics on how long the Fed expects to keep interest rates low at the next FOMC meeting.

A concern that has been on the minds of some investors, since the sizable fiscal and monetary stimulus began, is the fear of runaway inflation once the economy starts picking up. Looking at the 10-year breakeven rate, which is a measure of investor’s inflation expectations (spread between a nominal treasury bond and an inflation-linked bond of the same maturity), we can see a significant reversal since the March bottom (see chart below). The concept is quite simple really: if you think inflation is going to be higher than the current 10-year breakeven rate (1.72%), then buy a 10-year TIPS (treasury inflation-protected securities). So as more people purchase TIPS, the breakeven inflation rate increases, and that’s what we’ve been seeing since March of this year. We’ve seen yields on the 10-year TIPS fall by half a percentage point from where it was in March (meaning the price has increased a lot since a bond’s price moves opposite to its yield). What we can interpret from this uptick in demand for TIPS is that investors’ fears of inflation have picked up since the fiscal and monetary stimulus began. 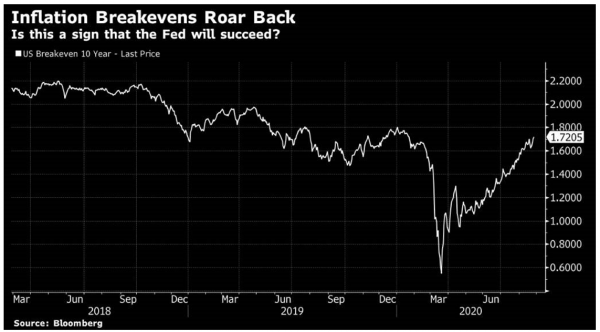 Now, the story this tells can be worrisome at first glance, but if we reference the previous financial crisis with record-low rates, large Fed debt-purchasing programs and fiscal stimulus don’t necessarily lead to runaway inflation. Also, we should consider the current measures already taken in the financial system with banks holding required reserves, a low money multiplier, and the significant increase in loan loss reserves due to the pandemic. The money multiplier, which measures the banks reserves to money creation through lending, has decreased dramatically. Compared with the multiplier in the ’70s (when stagflation occurred), the multiplier today is a fifth of that size. In addition, with banks holding more than just their required reserves to cover consumer defaults there’s even less money going into circulation. Both factor into the velocity of money, which essentially tracks how often money changes hands. For the first two quarters of 2020 the velocity of money has been sharply decreasing (see chart below). While these factors illustrate that the risk of runaway inflation may not be great, it’s important not to disregard it and it may be prudent to incorporate a risk-managed approach in case the Fed’s hand is forced. We’ve taken this in the form of our fixed income portfolio by underweighting our exposure to interest rate risk relative to the U.S. bond benchmark. 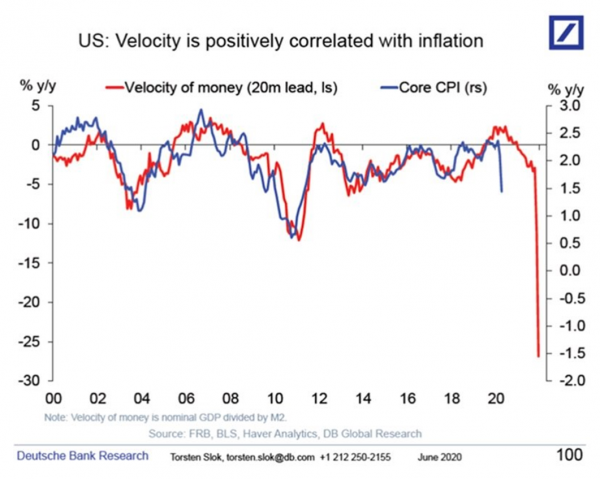 The markets had a rough time measuring the implications of Powell’s statements during the conference on Thursday, as seen through the swings throughout the day, but ultimately ended up for most equity indices. In addition to the new inflation target methodology, it was a very good week for the markets with durable goods orders (a measure of future manufacturing order demand) coming in way above expectations, growth in personal spending (albeit slower), and jobless claims were slightly less than the prior week. The S&P 500 was up 3.3%, the Dow was up 2.6%, and the Nasdaq was up 3.4% over the past week.

With markets at all-time highs, the number of attractive opportunities grows increasingly slimmer, but we are keeping a close eye on our watchlist for when they do surface. As always, please don’t hesitate to reach out to your financial advisor with any questions or concerns you may have.