A lot of our market updates have revolved around discussions of going long stocks, but this week we took a different approach and kept things short. Of course, I’m referring to short selling. I’m also going to apologize upfront for the short puns that may result in excessive eye rolling. But I’m a punny person, so I’m going to keep using them.

So, what is short selling, also referred to as a short? Short selling is what speculative investors use to place a bet on the value of a stock decreasing in the future. This is a transaction in which the short seller doesn’t actually own the stock they want to “short” and must borrow it from a lender (typically a broker/dealer). The short seller then has the obligation to return those borrowed shares in the future. Let’s call the short seller, Sam, and the lender, Lenny. So, Sam borrows 100 shares of Stock A from Lenny at the market price of $10 a share. Sam then proceeds to immediately sell those 100 shares at the market price ($10) and pockets $1000. Now let’s say the price falls to $5 a share and Sam repurchases the 100 shares and returns them to Lenny. Sam then takes a profit of $500 (minus any borrowing costs associated with the short sale).

Now, what happens when the opposite situation occurs? If the value of the stock appreciates, that would not bode well for the short seller because they have the obligation to repurchase the shares they borrowed. And if a stock can rise infinitely, then a short seller’s loss is infinite. In addition, all short sellers are required to maintain a certain amount of capital to be used as collateral for the short sale called a maintenance margin. If the short seller becomes unable to meet their maintenance margin with current funds, they’ll be faced with a margin call and asked to close the position (buyback the shares) or add more funds. And that brings us to last week’s events.

I can safely say no case studies in my options and futures class could’ve prepared me for last week, but you bet it will be in every Investment 101 textbook for decades to come. It was a classic story of David and Goliath. Hedge fund, Melvin Capital, versus the r/wallstreetbets’ degenerates (self-proclaimed). What started this cascade of events was the amount of short interest on GameStop (GME). The short interest on GME was, and still is, more than 100% which meant there were more short sales outstanding than there were outstanding shares being traded in the market. Reddit group, WallStreetBets, seized this opportunity and banded together to buy up shares with the goal of instigating a short squeeze. They certainly achieved that to start the week with smaller hedge funds closing their short positions in GME (which in turn pushed the stock up further). As momentum grew, with more retailers buying up shares, Melvin Capital had to close out its position at the end of the week losing about 53% in the process with GME gaining 400% for the week. 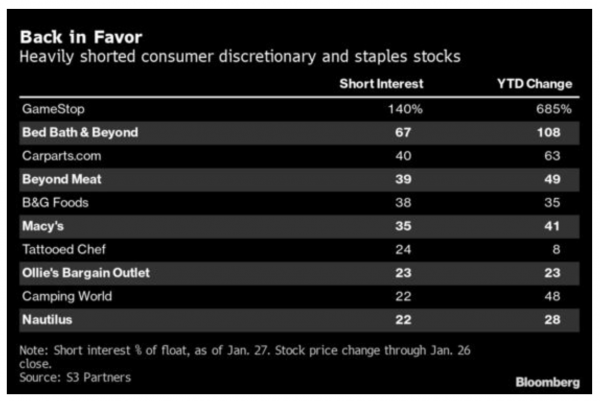 The market implications of last week might have a short-term impact on other “short-squeezable” stocks with high short interests (which have already seen a lot of trading volume for just being in that category: AMC, BB, BBBY, etc.). But the larger story remains on regulation and action. Many are looking toward the SEC and Congress for action against the brokerages that restricted trading of GME, AMC, and some other stocks (noting clearinghouse deposit requirements or risk-management decision). Robinhood had lifted the restrictions on Friday after a new round of funding, with limitations, but the damage had already been dealt. There were even cases where some Robinhood users had their shares of GME forcefully liquidated in their accounts. Some were margin called, which is legitimate, but it’s still not known if all were similar situations. Even with strained trust from some of its current users, Robinhood is still seeing high demand. Today, Robinhood announced it’s increasing emergency funding to $3 billion after hitting record downloads of 1 million per day.

Looking forward, the SEC came out with a statement that they would monitor the situation following Senator Warren’s letter on Friday. In Congress, bipartisan criticisms on the actions of the brokerages to halt new buys on these speculative securities had been seen as an act to hinder retail investors in favor of institutions. The next steps look toward the Senate Banking Committee and the House Financial Services Committee to hold hearings on recent events and the role hedge funds played in them. Increased regulation standards on hedge funds? Maybe. Short selling reform? Doubtful. For now, it’s too soon to say.

Long story short (commence eye rolling), if there’s no such thing as a free lunch, definitely be careful about borrowing someone else’s lunch. Thus, we’ll stick to the strategy we know and can have conviction for: looking for high-quality companies with strong fundamentals.