Geopolitical tensions are rising and bringing quite a bit of unpredictability to markets. What didn’t roil markets was last week’s commentary from the Federal Open Markets Committee (FOMC) meeting minutes released on Wednesday. The commentary investors were looking for in the Fed’s minutes was regarding their stance on the number of rate hikes that could take place at the next meeting occurring on March 15-16. The tone of the commentary did not seem overly hawkish, meaning that the they will likely not be pursuing two rate hikes and will instead opt for a single 0.25% rate hike. A single rate hike will move the Federal Funds Rate to the 0.25% – 0.50% range – the first rate hike in four years.

The key interest rate cuts took place in March 2020 when the central bank cut the range by 50 basis points (0.50%) and subsequently cut the rate by another 100 basis points bringing the Federal Funds rate down to 0.00% – 0.25%, where it currently sits. This was done to reduce the economic risks caused by the onset of the COVID-19 pandemic.

The rate cuts proved to be a good move, as the economy was hit with massive layoffs, as reflected on the weekly report of initial unemployment claims. The Fed’s role is managing a careful balance of easy monetary policy and tight monetary policy, can limit the amount of spending by the public and private sectors. Spending ultimately impacts growth, which is reflected in Gross Domestic Product (GDP). The issue the Fed is facing now is due to the inflationary pressure easy monetary policy has created.

Since the last meeting, which took place on January 25-26, a key economic report was released, inflation data. The inflation report released on February 10 showed that inflation in January had moved up to 7.5% on a year-over-year basis, up 0.50% higher than the previous report. At that time, investors were pricing in an 80% chance of two rate hikes. That probability has dropped due to the commentary found in the FOMC meeting minutes and commentary from Fed officials in the days after the release. Investors are now predicting that the Fed will not move as aggressively as initially anticipated.

Commentary following the release of the Fed minutes pointed out that certain borrowing rates have already moved higher in expectations of tighter monetary policy. One key rate is the 30-year mortgage rate, which has moved from 3.11% at the end of last year to 3.92% on Thursday of last week. Officials commented on Friday that their communication has effectively set the expectation of higher interest rates this year. In part, markets have helped in moving interest rates up. Based on Fed Funds futures, investors predict just one rate hike during the next Fed meeting on March 15-16.

There are several more weeks until the March meeting, and there will be several releases of economic data before then. Key data points will be the 2nd estimate of GDP (02/24/22) – which is expected to reflect positive growth, unemployment data (03/04/22) – which is leveling out, and PCE inflation data (02/25/22) – the key inflation data point for the Fed, is expected to move up. These data points will provide further insight into the next steps on potential changes to monetary policy.

What does this mean for equities markets? For reference, the following two charts reflect the historical performance of the S&P 500. The first chart circles the current environment we are facing, slowing but positive growth in GDP tied to rising treasury yields. These numbers will not match the performance that we saw in the last two years, but they still reflect a positive move for equities markets. The second chart shows the performance of the S&P 500 one and two years after the first interest rate hike. Again, we see that even during an aggressive tightening cycle (orange line), there was still positive growth for equities markets two years after the fact. Of course, the picture is a bit rosier for equities if the Fed does not increase rates as aggressively. Highlighted by the blue line, the chart shows market performance, including all rate hikes that have occurred since 1946. The black line just above reflects an increasing rate environment, albeit at a slow pace. Putting it together, after two years following the first rate hike, during an aggressive tightening cycle, the S&P 500 moved up by 4.3%, negating the -2.7% move in the first year. While in a relatively slower tightening cycle, the S&P 500 moved up by 10.5% and 1.6% in the first and second years after the first rate hike. 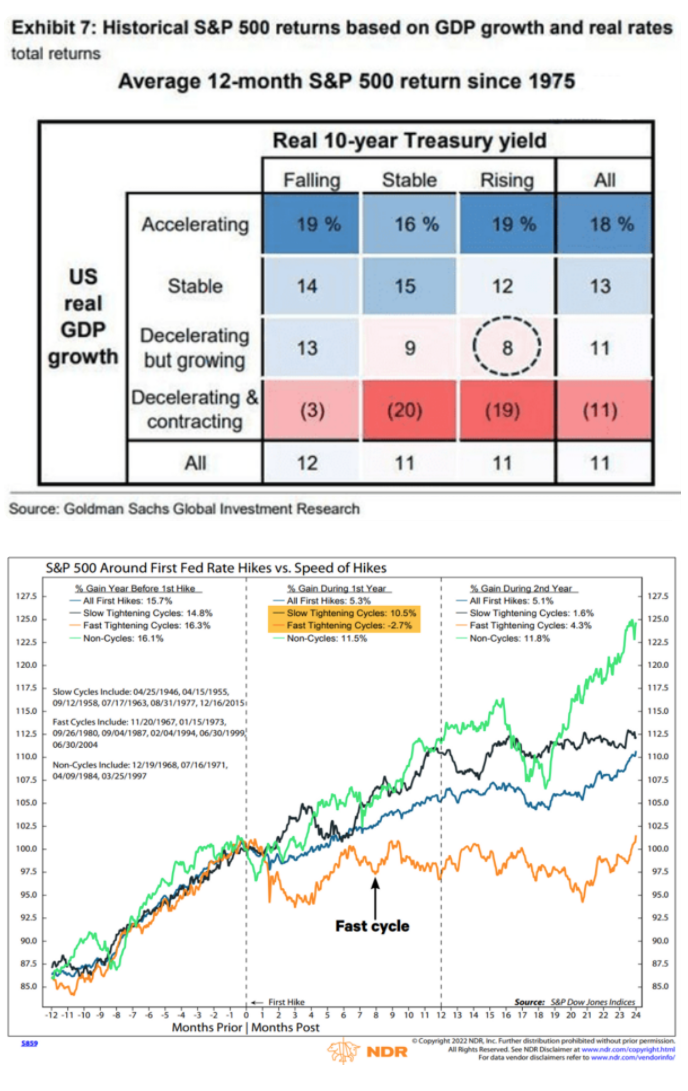 What does this say about your equity investments? The point here is that equities markets still have the potential to perform well under an increasing interest rate environment. Not to mention the unpredictability of what overseas conflicts could bring to equities markets, a single rate hike will leave a cushion for markets to fall back on in case the world economic environment experiences some downside risk. That said, not all companies will perform well under the predicted environment. It is important to evaluate companies on an individual basis and right now we continue to favor companies with strong balance sheets, great cash flow, and those with a competitive advantage. While it may be difficult to predict where market performance will end the year, we see clear signs that the economy is decelerating but remains resilient which is where financially strong and competitive companies will fare well.

All charts and data from Bloomberg unless otherwise indicated.

The information provided in this report should not be considered a recommendation to purchase or sell any particular security. There is no assurance that any securities discussed herein will remain in an account’s portfolio at the time you receive this report or that securities sold have not been repurchased. Past performance is no guarantee of future results. The reader should not assume that investments in the securities identified were or will be profitable.