Due to high inflation, rising interest rates, and now the catastrophic situation in Ukraine and Russia, the market has witnessed a lot of volatility. So, what does this indicate for the economy and the market? Let me start by describing how this all started, as well as the implications and whether or not we should be concerned.

The start of this crisis began because Ukraine, a former Soviet republic, wanted to join the North Atlantic Treaty Organization (NATO), a military alliance made up of several European countries and two North American countries. Vladimir Putin, the Russian president, was against it because he considered NATO, which is led by the United States, as a threat to Russia. Especially since it has expanded eastward to include several former Soviet republics. Russia and Ukraine have always had a tense relationship in the past because Russia has always sought, and even attempted, to restore control. As a result of Ukraine’s request for their participation, Russia began moving troops near the Ukrainian border. So, how will this impact the economy and stock market?

For starters, oil and natural gas prices have been influenced since Russia, as the world’s second-largest producer and exporter of petroleum, has enormous clout in the global oil market. Russia was only recently allowed into the Organization of Petroleum Exporting Countries Plus (OPEC+), an organization which manages oil production in order to set the price on the global market. Since Russia wields so much power in the market, the US has been looking for additional alternatives to keep oil prices from rising. Two of these options are negotiating with Saudi Arabia to enhance global oil supply, or tapping into the United States’ emergency supply, as we did recently to help lower oil prices. European countries like Germany are especially sensitive to these issues, given their dependence on Russian oil and gas.

Should I be Worried?

Despite the fact that everything appears to be alarming, geopolitical disasters have not historically been extremely destructive to the stock market. In 1914, during WWI, the Dow Jones Industrial Average (DJIA) returned negative 30% but that is because they closed the stock market for the entire year (six months). After reopening, the DJIA rose more than 88% the following year, which was the highest ever on record. From then until late 1918, the DJIA gained more than 43%, or 8.7% a year. The DJIA then increased by more than 50% during WWII, which lasted from 1939 to 1945, exceeding the average annual increase of 7%. The point is that, despite market volatility, geopolitical conflicts result in higher market returns. Markets benefit from geopolitical conflicts in general. Unfortunately, everything is bad outside of making money because everything occurring overseas is tragic, but this is only talking to historical stock market returns. Other geopolitical events and subsequent market reactions are included below, with the majority of them resulting in positive market returns. 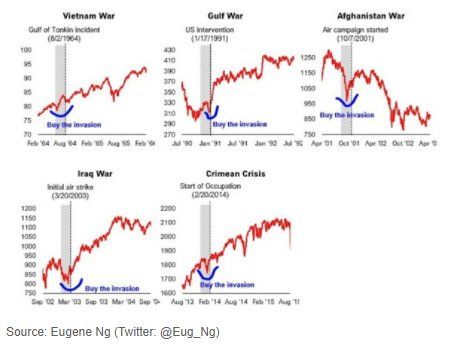 Another point worth mentioning is what my colleague Josh preaches: Staying invested is KEY and better than trying to time the market. After major events cause a market drop, history has shown that the market recovers and, in every case, exceeds previous highs. This was recently observed during the pandemic, when stocks fell and then rose to all-time highs shortly after. It is critical to keep your long-term goals and investment objectives in mind. Those who sell during a market downturn risk missing out on significant gains during market recoveries and bull cycles. Below is a visual representation of how much more beneficial staying invested was during the worst trading days in the last 20 years.

Of course, the lives lost, and the destruction caused by war are far more important than the financial consequences. May the situation be resolved in a peaceful manner.

All charts and data from Bloomberg unless otherwise indicated.

The information provided in this report should not be considered a recommendation to purchase or sell any particular security. There is no assurance that any securities discussed herein will remain in an account’s portfolio at the time you receive this report or that securities sold have not been repurchased. Past performance is no guarantee of future results. The reader should not assume that investments in the securities identified were or will be profitable.