In economics, there are several different indicators that can tell us the state of the economy today (lagging indicators) and tomorrow (leading indicators).  However, there is an unconventional indicator that is “reserved” by the banks that isn’t found in Econ 101 textbooks.  This would be a balance sheet item known as loan loss reserves.  Loan loss reserves are funds that banks set aside to cover any potential delinquencies/defaults from its borrowers.  But more importantly, loan loss reserves can tell us a lot about where a bank views the state of the economy today, and where they expect it to be next year (even years).  If banks see a higher probability of people defaulting on their loans, likely due to a recession that’s accompanied by higher unemployment, then they will set aside cash to account for these expected losses.

Well, for much of 2020, banks have been loading up on these reserves which have negatively impacted their bottom lines.  This is because loan loss reserves are first written as a one-time expense on the income statement, which will reduce overall profits, and recorded as a contra asset (netted against gross loans) on the balance sheet.  If a bank loses profits when it builds up its reserves, it’s only natural for the opposite to hold true as well.  And that is what we saw last week when banks reported Q4 earnings for 2020 showing multiple banks releasing portions of their reserves. 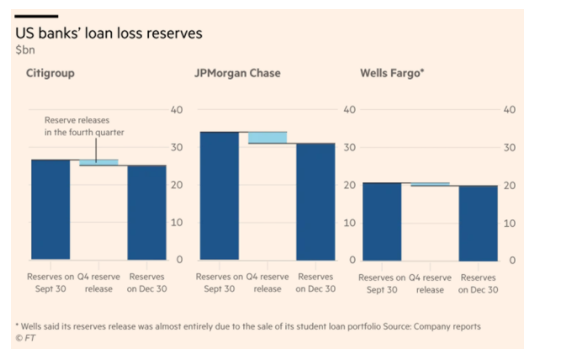 This reflects a sign of optimism on the vaccine front and a push for more stimulus under the Biden administration could support consumers and businesses.  That extra fiscal support provides big banks some relief that commercial and individual borrowers could repay their loans.  Additionally, the largest borrowers for big banks are institutions with access to capital markets (ability to issue more debt or equity) and mid-size firms that have access to the Fed’s Main Street Lending Program.  So, their borrowers with the largest financial commitments typically have that secondary backstop.

It’s safer to say that banks are being cautiously optimistic since a significant portion of reserves are still set aside for losses (much larger than pre-pandemic reserves).  While the 2021 picture has become less ambiguous with clarity on the next presidential administration, potential for more fiscal stimulus, and vaccines being administered, there’s still plenty of uncertainty surrounding the economy and the pandemic for the banks to justify holding large amounts in reserves.  Whether the fiscal support lifeline lasts long enough to avoid an onslaught of possible defaults will be dependent on how long the pandemic lasts.

If you haven’t done so already, don’t forget to sign up for our last webinar of the Wealth Building Series: The G.O.A.T., tomorrow at 3 PM PST.  Link here.  As always, please don’t hesitate to reach out to the office or your wealth manager with any questions you may have.  Stay safe everyone!