Well, we’ve made it folks. We’ve gone past the halfway point of 2020, and now we’re stepping into earnings season territory. This is the quarter that every economist, analyst, strategist, and all the other -ists have been dreading, yet almost everyone has been expecting. That’s because this earnings season will reflect the full impact of the shutdowns as well as the slow reopening’s effect on companies and the steps they’ve taken to weather the storm. As you’d expect, nearly all companies in the S&P 500 have seen significant downside revisions to their second quarter estimates to factor in the pandemic. On an aggregate level, FactSet is estimating a year-over-year earnings decline of -44.6% for companies in the S&P. However, much of the narrative remains the same as our first quarter earnings review. Which is that this earnings season will again have less emphasis on “earnings” and more on “liquidity”. Which companies are financially stable enough to weather through the volatility and hardships of the current recession?

And that brings us to the first sector that reported this week, which also happens to have one of the most informative reports regarding the health of our economy: banks. Especially during times of economic distress, the quarterly reports from banks can tell us a lot, from the health of the consumer to the stability of our financial system.

Before we get into the reports, let’s address how the banks fared in sustaining their capital requirements. Last month we received data from the Fed’s Stress Test that indicated many banks could remain well-capitalized in even the harshest shocks to the economy going forward. This Stress Test included a sensitivity analysis based on three downside scenarios that could result from the coronavirus: a quick reversal (V-shaped), an extended recession (U-shaped), and a double-dip recession (W-shaped). The Fed found in all three scenarios that most banks remained above their minimum capital requirement of 4.5%. On an aggregate level, the V-, U- and W-shaped scenarios maintained a minimum capital requirement of 9.5%, 8.1% and 7.7%, respectively. Thus, compared to the Global Financial Crisis, our banks have a much stronger foundation to support the financial system throughout the current crisis.

Now, let’s dive into bank’s week. At first glance, if you were to look at the year-over-year earnings growth of the top financial institutions in the first and second quarter of this year, you’d likely be very surprised to see the high double digit negative numbers. Don’t fret. These numbers are largely inflated by an expense called loan loss provisions. The purpose of this expense is in the name, such that banks can set aside a certain amount of cash during each quarter to finance potential loan defaults from borrowers. Loan loss provisions are recorded on a quarterly basis and either add or subtract to the total loan loss reserves recorded on the bank’s balance sheet. Tracking loan loss provisions can be a powerful gauge for how the banks view the health of the consumer and the economy in the short term, especially during a recession. Over the second quarter, many of the large banks sharply increased their provisions, and some even surpassed their peak levels in ’08. JPMorgan set aside an additional $10.47 billion in loan loss provisions, Citigroup set aside $7.9 billion, Bank of America set aside $4.8 billion, and Wells Fargo set aside $9.5 billion. 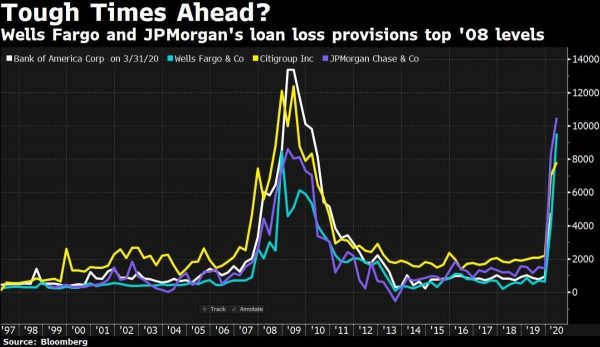 Another number that goes hand-in-hand with the loan loss provisions is something called the charge-off rate. A “charge-off” refers to debt that is unlikely to be recovered, and is deducted from the overall loan loss reserves. The charge-off rate is a percentage based on the amounts of loans expected to default (also known as “bad” loans) divided by the total amount of loans outstanding. Thus, the higher the charge-off rate, the higher the number of defaults. In the past 3 recessions, the charge-off rate on all commercial and industrial loans grew at a gradual pace during the recession and typically peaked 1-2 quarters into the beginning stages of the recovery (as shown in the graph below). Charge-off rates for consumer loans also illustrated the same trend.

This goes to show that companies with high, unsustainable leverage don’t have favor in recessions, and that trend of defaults could continue for months and quarters after the recession is over. That’s why it’s so important that we incorporate high quality companies with healthy balance sheets into our screen, especially for times like these when the risks are high.

Also, if you haven’t signed up yet, Part 3 of our Portfolio Construction Series titled Growing Our Wealth is in two weeks on Wednesday, 7/29. This section will comprise of the importance of equities in a long-term growth strategy as well as Apriem’s approach to investing in this asset class. If you have yet to sign up, we have two sessions available: one at 11am PST (link to RSVP) and another at 4pm PST (link to RSVP).

In addition, if you missed Part 2 of our Portfolio Construction Series: Laying the Foundation for Growth, here’s a playback recording for you to watch.

As always, please don’t hesitate to reach out to your Wealth Manager, or anyone else on the team, with any questions you may have. Stay safe everyone!