There’s pretty much just one thing my wife and I have on our minds recently.  We have two of the 73 million school-aged children in America and we are waiting to see what happens with schools in the fall.  As August quickly approaches, it signals the end of summer.  The dread of trying to figure out what we have to deal with in the fall is becoming more and more of a reality.  Like most school districts, our district (Capo Unified), had come up with various plans for the fall re-opening.  Those plans went out the window with the recent spike in COVID-19 cases and the Governor’s recent orders.  What a horror story for all the local officials to have to deal with.

I’ve read through our district’s plans, and I think local officials are doing the best they can in light of the situation.  But the situation is still moving quite quickly, and I don’t think these officials will know anything until right before the start of school.  There is no perfect solution here.  My expectation is that we’ll have to home school our kids this fall.  Hoping for the best but expecting the worst.  My greatest fear would be having a scary animated clown teaching my kids about state capitals and fractions.

The home-schooling trend seems to be worrying everyone.  Recent studies have shown that families are fleeing the big cities and moving to the suburbs.  Homes sales jumped 20% last month driven by “people looking for a large sized home to accommodate working from home.”[1]

Of course, the other driving factor is the current ultra-low interest rates.  For the first time in history, 30-year mortgage rates have fallen below 3%.  With rates so low, the math changes dramatically on mortgage payments.  Previously unaffordable properties are now more affordable on a monthly basis.  Only if you aren’t one of the 30 million unemployed, of course.

Ultra-low interest rates have also impacted other areas besides real estate.  Specifically, its relationship with equities.  In the past 30 years or so, it has been rare for you to earn more in stock dividends than interest from government bonds.  It’s happened only three times in history (see purple lines below) and all within the last 15 years.  The 2008-09 Great Financial Crisis, the 2014 Great European Debt Crisis, and whatever history books are going to call 2020.  All three times proved great buying opportunities for stocks. 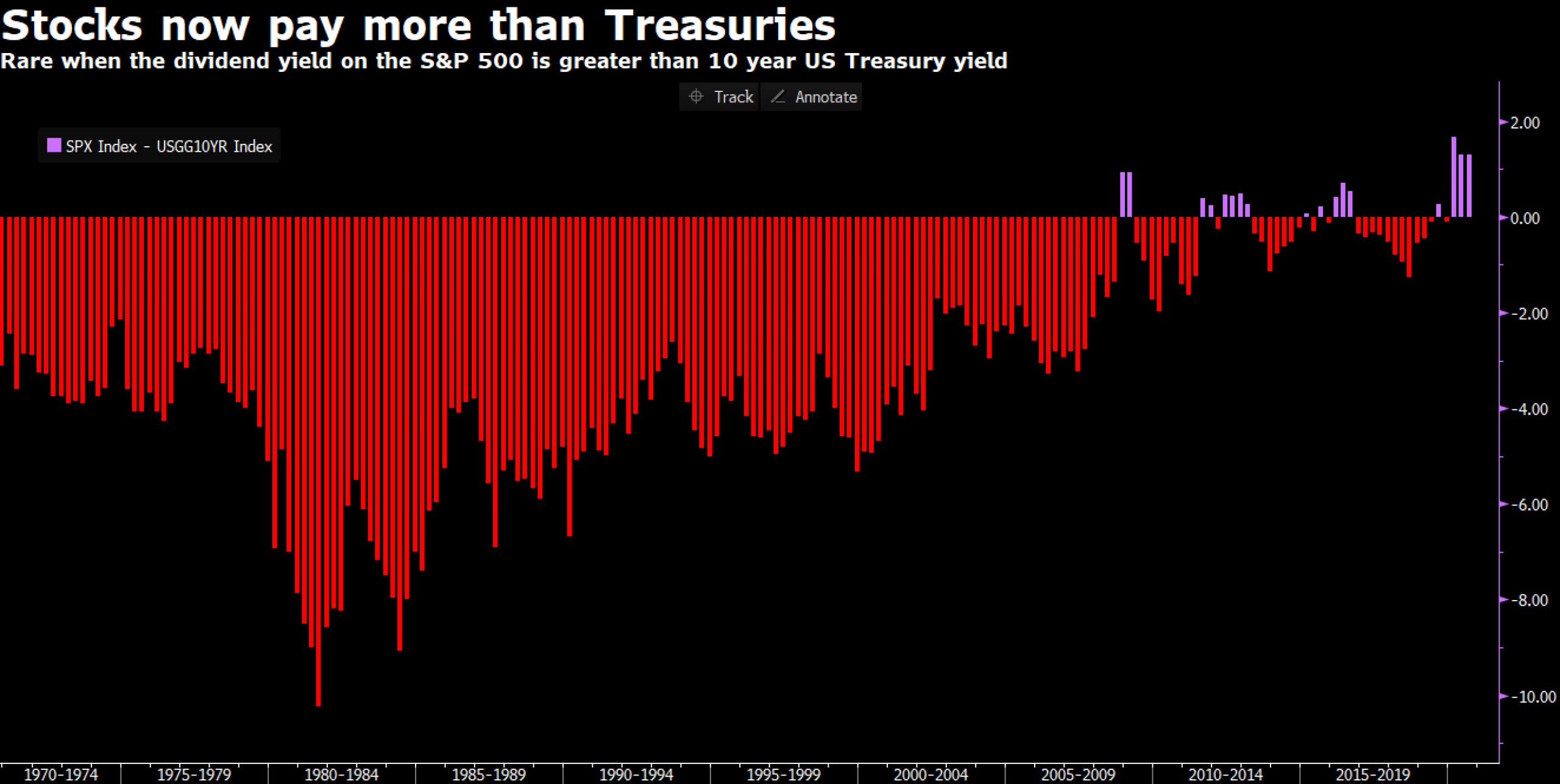 Ultra-low interest rates have also affected the U.S. Dollar.  Resilient until recently, the Dollar has fallen dramatically.  For the past few years, U.S. Treasuries have been yielding multiples of what you could get investing in government bonds from other countries like Japan and Germany.  But recently with U.S. yields so low, that advantage has diminished and there has been a dramatic flight of assets out of America.  The U.S. Dollar Index or “Dixie” (which is made up of mainly of Euros, Yen, Pound Sterlings, and Canadian Dollars) has fallen dramatically.  The falling US Dollar, along with improving fundamentals in Asia and Europe, have buoyed overseas investment in the past few months.

The sudden shift in market leadership would have been hard to predict just earlier this year.   Developed markets (think Europe and Japan) as well as emerging markets (China and rest of Asia) have been outperforming the U.S in the past few months (see below).  This has boded well for our core positions in overseas markets.  Hard to tell if this trend will continue, but it does seem like Europe and Asia are coping with the COVID crisis better than expected.  Combine that with generally lower valuations, and overseas markets continue to make a compelling story.

The story of 2020 is still being written and we’re only halfway through.  James Stewart wrote a colorful narrative about the 80s junk bond craze in “Den of Thieves”.  The legendary storyteller Michael Lewis covered the Great Financial Crisis in the “Big Short”, which became a star-filled movie.  Whatever we call 2020, I’m positive that the book is being written by Stephen King, and Quentin Tarantino is directing.  Intermission is over.  Enjoy the second Act.

Also, please don’t forget to sign up for the third part to our Portfolio Construction Series: Growing Our Wealth. This will be one you don’t want to miss!  We’ll be going over the fundamentals of equities (stocks) and how we employ a rules-based system into our investment approach.  We have two sessions available for Wednesday, July 29: one at 11am PST (link to RSVP) and another at 4pm PST (link to RSVP).