Summer is quickly approaching Southern California. As many of you have felt in the past few days, it’s getting hot. I live in south Orange County and it was almost 100 degrees in my neighborhood this week. My air conditioning has been running non-stop. With two children and wife at home all day, I am beginning to think about what my electricity bill will look like next month.

Besides my electricity bill, summer also reminds me of all the whales we get to see along the Pacific. Catching the sight of a large blue whale is an amazing thing to see in person. The massive creatures are simply too large for Animal Planet to capture. Blue whales are in particular one of the largest animals to have ever existed.

So large are these mammals that many have taken to use the term whale to describe a big player, a gamer. In casinos, whales are generally the high rollers. On Wall Street, the whales are the large investors, otherwise known as the market movers. Big (and rich) hedge fund managers like Warren Buffett, David Tepper, Stanley Druckenmiller, and Ray Dalio. They are whales because whenever they make a move, they will affect everyone around them.

In the past few weeks, there has been a new whale in town called Robinhood, a newish service that allows inventors to trade stocks for free. Newer investors, lured in by free trades (which Schwab offers too) and a simple mobile app, have especially taken a liking to Robinhood. The Merry Traders at Robinhood have grown in size. What’s been more noticeable recently is what these Merry Traders have been buying. Of course, the big tech names were very popular, Microsoft (MSFT) and Apple (APPL). But even more popular have been the highly speculative ones. Penny stocks, cannabis stocks, and COVID recovery names like Ford (F), American Airlines (AAL), and Carnival Cruise (CCL). Some of the same ones that Mr. Buffett had been selling.

It would be easy to dismiss these young investors as young guns; trying to hit homeruns with these names. Surely they will fail. If I had to bet on someone, who would you take? Warren Buffett and Ray Dalio? Or Robinhood and his Merry Traders? Crazy enough, these Merry Traders have been crushing it recently. Until yesterday, the recent surge in the market has pushed many of these speculative names to insane levels. For example, some of the most popular names being traded on Robinhood have been companies that have sought bankruptcy protection recently. Hertz (HTZ), JC Penny (JCP), and Chesapeake (CHK) have all sought the protection of bankruptcy courts, but their shares have exploded 100-400%.

Apparently no one has told these people that when a company goes through Chapter 11, the equity is usually worthless. In most cases, that’s true. Most reorganizations will negotiate down their debt and wipe out equity shareholders, but that’s not always the case. Given how over leveraged Hertz, JC Penny, and Chesapeake were, surely there are not enough assets to satisfy their debt holders and little will be left for everyone else, especially the equity owners. The Hertz and JC Penny we remember long ago are not the same companies of today. So why invest in these names? Well like many people, I am sure Robinhood and their Merry Trades are doing it to make a quick buck. I doubt they are in it for the long haul and ready to fight for their rights in a federal bankruptcy court. Retail investors rarely tread in this space; it’s too complicated. Something that complicated is best suited for deep pockets like Elliott Management.

Also quite complicated, apparently, is figuring out what the exact state of the unemployment situation is. There are a few different ways to measure how many people in America are out of work. Last Friday’s May unemployment report was a big one; a glimpse into an economy recovering. Surprising many, the unemployment picture actually improved in May. It was an excellent report, equity markets surged on the news. But wait, those that read the 40 plus page report noticed something in the fine print. The economists at the Bureau of Labor Statistics noticed some discrepancies in their findings. One of the main ways we measure the unemployed in America is via survey of about 60,000 people. The government doesn’t collect data from all the employers and such. Back in March the people at the BLS noticed an anomaly. They were getting a higher number of people that responded “employed but absent from work” which is usually just people on vacation. Many Americans didn’t know their exact status, and apparently they should have been categorized at unemployed. Rather than revise the data and risk dealing with claims of “fudging” the numbers, with the goal of full transparency in mind, the BLS decided it was best just to note the “misclassification” within the report. 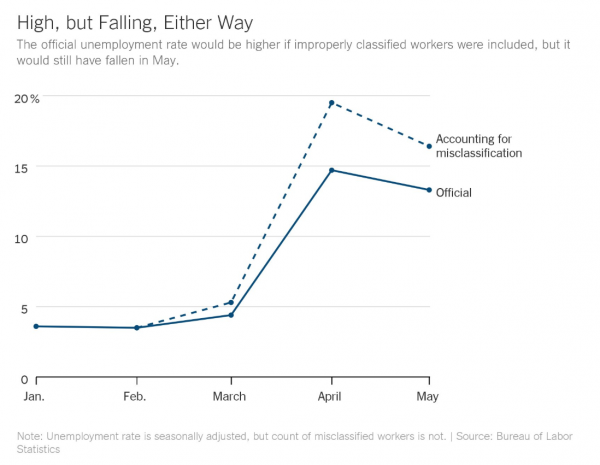 The bad news is that more people in America are unemployed than we think.  The good news is that the trend is improving.  The unemployment situation wasn’t just worse in May, it was also worse off in March and April too.  While things are a little worse than what we initially thought, the numbers still show that we are improving.  The ranks of the unemployed fell from almost 20% to just over 16%.  Better, but still a long way to go.  That’s why it is important not to read into one single data point.  It’s an inexact science.

As the economy continues to recover, the path will continue to be fraught with twists and turns.  That’s why it’s so hard to trade on economic data like unemployment or GDP.  Companies will fall into distressed states, and some may even close their doors for good because of what’s happening right now.  However, we’re not here to pick that highly leveraged company that just filed for Chapter 11 and predict how they’re going to make that miraculous turnaround.  Because a majority of the time, it’s a losing battle.  That’s why our process continues to focus on finding great businesses that can sustain themselves in different environments and through periods of stress.

Have a great weekend and stay safe.