Last week was eventful, to say the least. The major news came from the FOMC meeting where we heard that the Fed anticipates possibly starting to raise interest rates by late 2023. This moved their estimated timeline up a year, and not only that, but the Fed also began their “discussion to begin discussing tapering”. Although, that meant the Fed was not ready to taper back its treasury and mortgage bond purchases right now. Shortly following the news, markets retreated, and treasury yields spiked as investors’ fears on inflation manifested. However, even though the Fed’s expectations for hiking interest rates have changed, the committee is still holding strong that high inflation readings will be transitory. One reason the Fed continues to expect these spikes to be temporary is because they’re considering the base effect of inflation.

It’s really quite simple to understand. When you’re using a metric that compares two different periods, and the base period contains a significant outlier scenario, the results could become distorted. Significant outlier scenario = pandemic. Now apply this principle to the past two inflation readings: 4.2% in April and 5% in May. If we take these two numbers directly at face value, of course these numbers are significantly high readings for inflation. Thus, comparing the past couple months of inflation readings with their corresponding deflated bases a year ago isn’t necessarily going to give us the most accurate picture.

You can also apply this same logic to earnings. If you compare Q1 2021 profits of S&P 500 companies with their corresponding profits in Q1 of 2020 when the pandemic hit, you’d see a significant spike in earnings growth (approximately 288% over 1 year, according to S&P Dow Jones Indices). However, if you compared the same Q1 2021 profits with Q1 profits from 2 years ago, the earnings growth was within a much more sustainable growth range (approximately 32% over 2 years, according to S&P Dow Jones Indices). 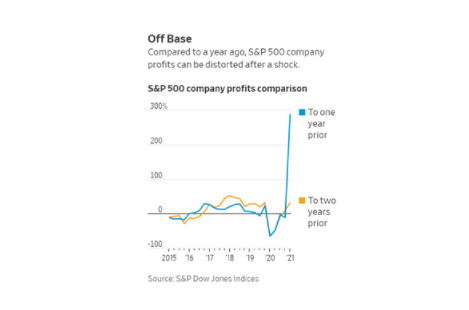 As for finding a more accurate measure of inflation, the Dallas Fed came out with a study that could help address the distortion. In order to smooth out the weak base effect from April’s inflation reading, economists from the Dallas Fed suggested considering an average inflation measure using February of 2020 as a base, or index. The chart below shows a 2.6% annualized average inflation trend for headline CPI since February 2020, and a 2.2% annualized average inflation trend for Core CPI (which excludes food and energy prices) since February 2020. These numbers are much more conservative than the 4.2% and 5% figures we’ve seen. 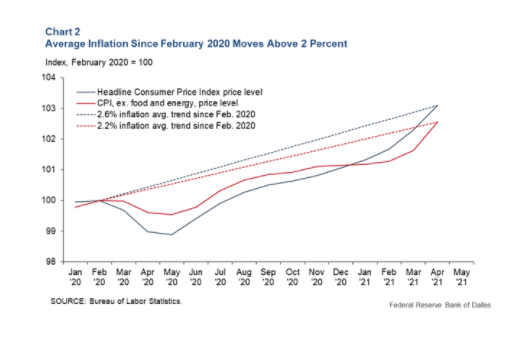 As for possible indications of these hot inflation numbers abating, we are seeing retail sales reflecting a slowdown with a -1.3% decline in May, and lumber prices falling back to more reasonable levels. The Fed has a lot to think about as they sit on two ends of a very sensitive teeter totter between slowly pulling money out of the financial system and not undermining the recovery by pulling out too soon.

In relation to how we’re investing, we maintain an underweight to interest rate risk in our fixed income portfolio so that we aren’t fully sensitive to any sooner-than-expected rate hikes. As always, please don’t hesitate to reach out to your wealth manager with any questions you may have.