Summer wouldn’t be summer without camping. My family really enjoys camping and we recently got back from a short camping trip near Mammoth. My son is a Cub Scout so we go car camping several times a year. He enjoys the outdoors. My wife and daughter usually join us but haven’t been able to in the past year. My daughter is younger and hasn’t gone camping as much as the rest of us.

The campgrounds were right outside Mammoth’s Eagle Lodge, on the serene Twin Lakes which is fed by the beautiful Twin Falls waterfalls. Of course, we weren’t just there to look at the waterfall. The hike up the falls was short with a very modest elevation gain, easy for an eight year old. Staring straight up, it seemed daunting for my young daughter. She was scared that the hike would be straight up. It was only after the hike that she began to understand the series of switchbacks we took made the hike much more manageable.

The lakes in the mountains are usually bustling with stocked trout. Not this year. A fellow camper told me that they haven’t stocked the lakes recently so there wasn’t much action. The calm lakes remind me of the calm equity markets we’ve had so far this year. Hard to believe that almost half of the year has already passed. Despite all the worries about inflation and the Fed’s next moves, equity markets have been quite calm. Since the beginning of the year, U.S. stocks are up more than ten percent. In fact, there hasn’t been more than a five percent correction all year. A stellar 2021 so far.

After a few years of heady returns, investors expect the good times to continue. Investor expectations for future returns have continued to rise. While we are still optimistic over the long term, high expectations and low returns will lead to disappointments. Despite the high expectations from investors, we don’t think it’s time to adjust your long term plan. Although the markets have done quite well in the past few quarters, we don’t expect stocks will continue to soar at this pace. 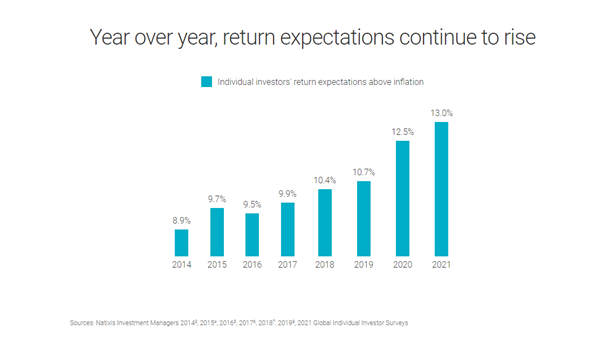 Looking forward to the second half of the year, we seem to be settling into a new phase of the economic recovery. Equities (home and abroad) sit near all-time highs, excitement built up as various micro economies open back up, and now the bond market is sending us a cloudier picture. Since April, bond investors have become more cautious on the economy than on inflation and have sent yields on long-term bonds lower. This “flattening” of the yield curve generally means warnings signs for the economy (explains why banks haven’t been performing well recently).

The flattening of the yield curve has been noticeable, but nothing for us to be too worried about. It is probably just investors dialing down their optimistic expectations for the future. We continue to expect the economy to do great things for the next few quarters, albeit at an uneven pace. Expect more conflicting economic data points; from the yield curve and inflation numbers to the monthly unemployment report (which will be released this Friday). Coming out of the pandemic, the economy’s rocky path is a long one.

My daughter made it up the waterfalls. After we reached the top of the waterfalls, we started to begin our trek down the hill. As difficult as the hike was up the mountain, my daughter was much more nervous on the way down. Parts of the trail that looked stable feel a lot less so coming down the other way. Going down required a lot more agility and stability; two things my daughter doesn’t have. After we made it back down, my daughter remarked that going down was much harder than going up. Ain’t that the truth.