Last week, fixed income markets made up much of the headline news. Towards the end of last week, the U.S. Treasury sold over $120 billion in 3, 10, and 30-year bonds. Meanwhile, on the corporate side, Verizon Inc. launched a $25 billion bond sale, marking the sixth largest corporate bond sale on record. Then on Friday, the yield on the U.S. 10-year Treasury climbed to 1.64%. A sharp move from the closing yield of 1.54% the previous day; indicative of a sell-off as bond prices fall when yields rise.

The rise in the 10-year Treasury yield has equity investors considering their exposure to technology companies since these yields play an important role in determining discount rates, or how a company should be valued today. Growth companies, like tech, that may not be generating profits now, but are expected to in the long run, are particularly sensitive to such valuations. Money generated in the near-term is more valuable than profits down the line which creates a weaker valuation for said companies. However, the increase in yields is not bad for all companies.

The climbing yields in U.S. government bonds have provided a tailwind for value stocks such as those in the financial sector. The higher rates allow banks to earn more on loans, which in turn generates higher profits. On the flip side, for borrowers, interest rates are still at the lowest they have been for many years. Bond issuances by U.S. companies hit $1.48 trillion in 2020, up more than 63% compared with 2019. Year-to-date, U.S. firms raised over $265 billion in bonds, up about 35% from the prior-year period. From the beginning of the month to last Thursday, non-financial companies issued $81 billion of investment-grade bonds, up from $38 billion in the previous two-week period.

However, the low interest rate environment is not good for all borrowers. For one instance, we look at the bond offering by Verizon. The company is financially stable and generates positive free cash flow which allows it to finance its debt. One way to measure a company’s ability to pay its debt is the EBIT-to-interest (earnings before interest and taxes) coverage ratio. The coverage ratio tells us how many times a company can cover its current interest payments (monthly payout to bondholders) with earnings. As of Verizon’s last earnings release, its coverage ratio was 6.7, meaning the company can pay its interest expense at least six times over with current earnings. This is one of the reasons why Verizon holds a BBB+ credit rating. If a company can borrow at low interest rates, but is not financially stable, its bonds will carry a lower credit rating. 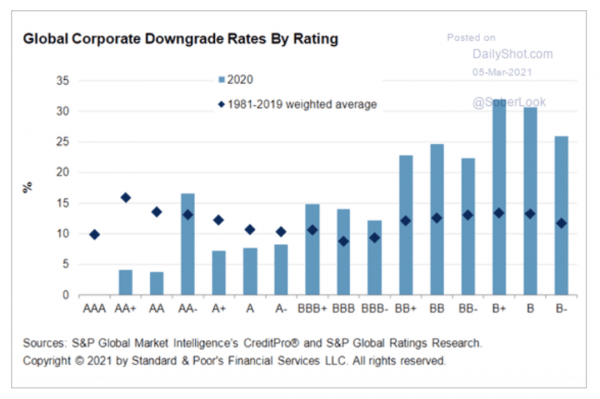 The chart above depicts the percentage of downgrades by each credit rating category. The lower a company’s rating (furthest to the right on the chart), the higher the probability the company will not be able to pay off its debt. The lower-rated debt has considerably more downgrades than the higher-quality debt (B+ 32% rate versus AA+ 4% rate). One reason a company might get downgraded is a declining coverage ratio. The weaker spending environment has led to lower earnings, and thus, a lower coverage ratio. Due to the amount of fiscal aid provided during the pandemic, lower-rated companies have been able to survive much longer relative to what their financial position would normally allow them to withstand. This has increased the amount of so-called zombie companies, or highly indebted companies. The chart below shows companies with market caps greater than $300 million and a coverage ratio less than 1 in relation to the U.S. 10-year real yield (inflation-adjusted yield). Lower borrowing costs should allow companies to refinance higher interest-bearing debt for lower interest rates, but we see that these unprecedented times have created financially weak companies. 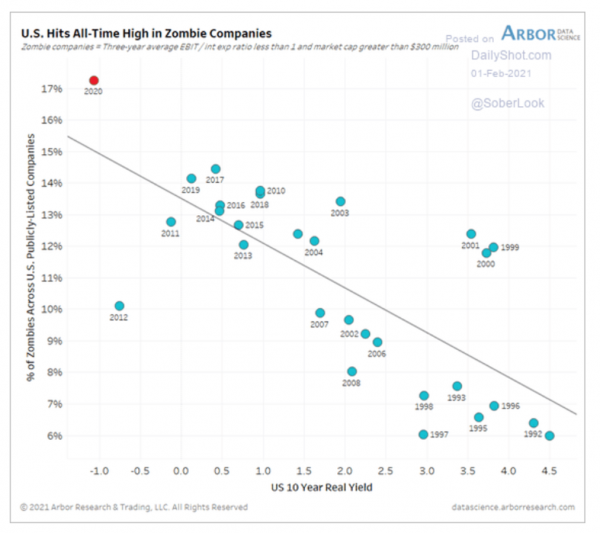 Last year, we saw interest rates and stock prices spring forward and fall back. Growth companies led in returns exceeding the broader market, and during the latter half, value companies moved to outpace growth. The last year created various opportunities which makes your investing process of critical importance. We continue to stick to our process of finding high-quality companies at attractive prices that can withstand the changing environments.