Tomorrow officially marks one year since the market bottomed, instigated by the current pandemic-induced recession.  Since then, the S&P 500 has gained about 76%.  With the sheer amount of stimulus rolled out by the central bank and the federal government, it’s not surprising that most market indices have been on a tear since March.  At the time, no one could’ve predicted that the S&P 500 would’ve broke even in a fraction of the time compared with the ’08 Global Financial Crisis (6 months versus 4 years).  However, as favorable monetary and fiscal policies continue to be pushed out (Powell restating leaving rates near 0 through 2023), the risk of higher inflation continues to grow on the minds of investors.  With the increased fears, metrics to measure those sources of fears have been receiving more attention.

There exists a few different metrics to measure inflation.  The most notable ones being CPI (consumer price index), and the Fed’s preferred inflation gauge, PCE (price consumption expenditures).  Along with inflation expectations, another forward-looking inflation metric has been getting more headline coverage: money supply.  Specifically, the M1 money supply, which tracks the total volume of U.S. currency held outside the U.S. Treasury (essentially money currently in circulation), has been turning heads.  As of January 2021, M1 grew 355% from January 2020.

355% is a staggering number.  Especially since M1 hasn’t grown over 40% since the aggregates were first recorded.  However, before you go all in on gold, the 355% jump is largely attributed by something that’s unrelated to the Federal Reserve printing new money.  It’s primarily due to an accounting rule change that the Fed enacted last March by removing the six-withdrawal limit on savings accounts.  Why this is relevant can be explained by the different measurements for money supply: M1 and M2 being the most common for individuals and small businesses.  M1 looks directly at paper cash, coins, and checking accounts.  M2 includes everything from M1 plus any cash held in savings accounts and retail money market accounts.  With the removal of the six-withdrawal limit, M1 saw a huge upsurge in volume as it began accounting for savings deposits in May (not new money).  Of the $14 trillion increase in M1 in May, $11.2 trillion (80%) came from the changes in the savings withdrawal rule.  That’s why the change in M2 (22%) is substantially smaller than M1 (355%), and a much more accurate measure of money supply in 2020. 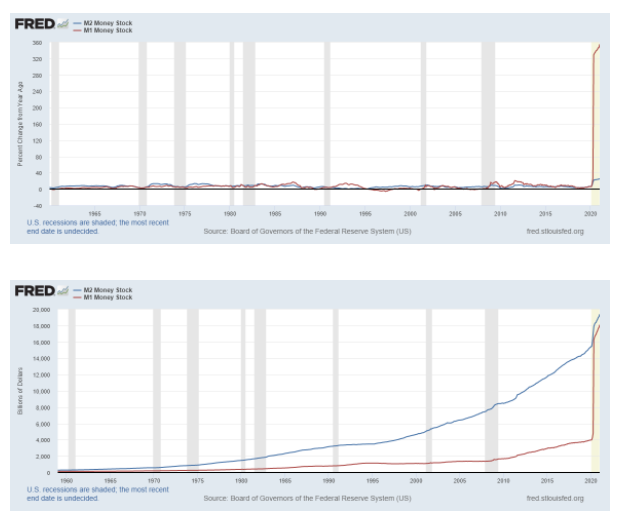 While hyperinflation fears might be unwarranted, inflation risks are still high.  The velocity of money, which shows the frequency at which dollars are spent on goods or services, has been decreasing throughout the pandemic.  An indication that more people are saving, which is common during recessions.  However, that doesn’t mean you should store a majority of your wealth in gold or other inflation-hedged assets.  Diversification is still important in spreading out your risk to different areas of the markets, and stocks have shown to beat gold in the long run.  For instance, if you had invested $10,000 in the S&P 500 thirty years ago, you would have turned that into $224.1k today, as opposed to just $43.3k had you been in gold during that same period.  That’s why it’s so important to stick to your long-term financial goals and not stray from that path.

As a reminder, the federal tax filing deadline has been extended to May 17th for 2020 taxes.  Please don’t hesitate to reach out to your financial advisor with any questions you might have.