I still can’t get accustomed to reading headlines like “Stocks Slip After Fed Holds Rates Steady”. I mean just a few years ago, before the pandemic, the market had the exact opposite reaction when the Fed began its tightening policies to unwind its balance sheet. And even more so, who would have thought during a recession that investors wouldn’t cheer to news that the Fed would keep money flowing into the economy. Certainly not me before 2020. However, one thing that’s been pretty consistent in showing a clear relationship between a company’s performance/outlook and the following effect on its stock price has been earnings season. Though, strangely enough, this earnings season hasn’t been all that black and white.

As of last Friday, 60% of companies in the S&P 500 have reported earnings with a significant majority of them beating estimates. In fact, 86% of these companies are reporting actual EPS above estimates. And it’s not that they’re just beating estimates, but a lot of them are beating estimates by a wide margin. According to FactSet, in aggregate, companies are reporting earnings that are 22.8% above estimates (far above the 5-year average of 6.9%). And if this were to be the final number, it will mark the second-highest earnings surprise percentage for the S&P 500 since FactSet began tracking the metric in 2008.

The image below illustrates the percentage of companies, by sector, that have exceeded (green), met (yellow), and fell below (red) their earnings expectations. As you can see, a significant number of S&P companies that have reported are posting positive earnings surprises with the technology sector leading this trend. 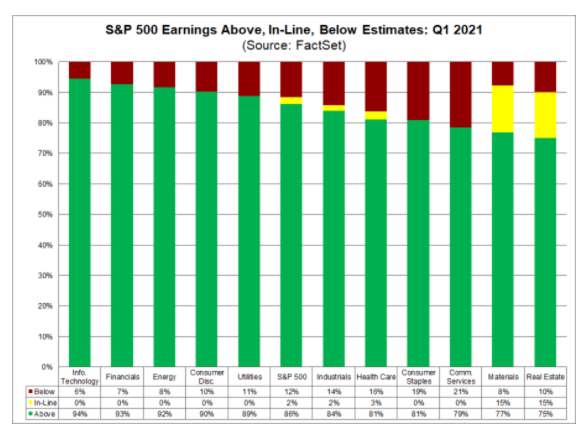 Surprisingly, and perhaps unsurprisingly, the markets haven’t been reacting all that much to these positive earnings beats. Unpredictably might be a better way to sum it up. For instance, Facebook and Google reported record-breaking revenues due to their digital advertising segments and saw their share prices rise dramatically. On the other hand, Apple reported another record quarter beating estimates and showed stellar sales growth in all their product and service segments, but still saw its share price decline slightly the day after it released earnings. Same instance with Microsoft. Some are attributing this lack of reaction for some stocks due to the amount of positive economic data reflecting optimism for this earnings season prior to the actual reporting numbers. Another could be disappointment in the size of some companies’ earnings beats; perhaps investors were expecting more. It’s unclear what the exact reason is. Speaking of economic data, we found out last week that gross domestic product (GDP) for the first quarter of 2021 grew by 6.4%, leaving the U.S. economy within 1% of its peak, reached in 2019, prior to the pandemic.

Nevertheless, while some companies may not be seeing the results of their earnings beats reflected in their share prices, it’s still a positive indicator that the economy is on the right track to recovery. As always, please don’t hesitate to reach out to your financial advisor with any questions you might have.