Markets across the globe continued to be volatile this week. The VIX volatility index has quietly creeped above thirty again. It should be no surprise given the continued negative data coming from all corners of the world. This week, the Labor Department reported that nearly another three million workers filed for unemployment claims, bringing it to a total of over 36 million Americans. While the dire unemployment situation has hopefully reached its peak, the thought of three million more people without work is heart breaking

Crazy markets and scary headlines can tempt many investors to react. Many are tempted to react to the news and abandon their long-term financial plans. Everyone is different but the usual thinking follows a couple trains of thoughts: “Let’s just sell now but I’ll jump back in when the ________ calms down” or “Let’s sell now and buy back when the market hits a low”.

To make matters worse, news outlets like CNBC often add fuel to the emotional fire, rather than trying to put the fire out. This week alone a few prominent billionaire investors came out with dire warnings for the stock market and economy. It was an impressive bunch: Chamath Palihapitiya (an early Facebook employee who now runs a venture capital firm), hedge fund manager Stanley Druckenmiller (former portfolio manager with George Soros at Quantum before striking out on his own), and David Tepper (another rich hedge fund manager, so successful he recently bought himself an NFL team). They have been making the media rounds sounding the alarm on the equity markets being overvalued and due to fall. Listening to these big wigs can be tempting. Following their advice is prudent, right? They made billions, their advice must be gold. Say you liquidate your equities, the billionaires are right and the market falls, now what?

As tempting as it is to follow their advice and make changes to your portfolio, most people should not listen to them. Hedge fund managers are different than most of us. Aside from owning a pro-football team, their investment strategies and time horizons are unique to themselves. Most hedge funds titans employ rapid trading strategies; they can be bullish one day then bearish another. Josh Brown (Reformed Broker blog) reminded us of this, “The biggest trade in Druckenmiller’s career was pulling two 180’s in the space of four days. Being out of the NASDAQ during the biggest tech boom ever, then being all in, and then two days later not only being out, but being short. [When he changes his strategy], He’s not going to call you. Do not change your asset allocation based on Druck[enmiller] because Druck[enmiller] ain’t gonna call you when he has a different opinion a few days later.” Druck’s not going to call you after the market falls to tell you to get back in. And surely, he’ll only call back into CNBC as a bull only AFTER his trades are done.

Investing based on news headlines, macroeconomic signals (like GDP and unemployment) is annoyingly hard. Using past performance is difficult too, so much so the SEC’s “past performance is no guarantee of future results” warning is ubiquitous on every piece of marketing material from Wall Street. So, what is an investor to do? Well, if you don’t have a dedicated investment process, probably nothing.

For the past couple of decades, a research firm in Boston has compiled the markets returns and compared them to the returns of the average mutual fund investor. The methodology is complicated (links are below if you’re interested). It should come as no surprise that the average investor does not do very well. Even if they invested in the best long-term mutual funds out there, investors experience a much worse outcome that the mutual fund itself. Over the last 30 year the S&P 500 has done about ten percent a year; maybe a little less if you include fees and commissions. But the average mutual fund investor has earned just over four percent, less than half the market! They attribute the underperformance to investors being human and exhibiting “irrational investor behavior”. 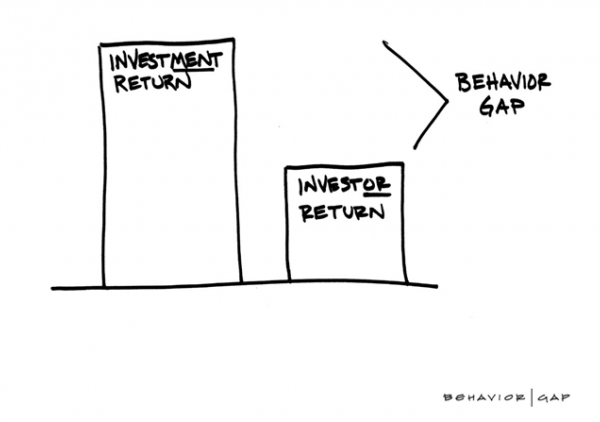 Their findings are mirrored in other studies. Investors tend to flock into hot performing mutual funds and flee underperforming ones. No one should be surprised about the outcome. The underperformer regains their mojo and starts kicking butt again, usually with a lot less investors. The hot performer’s performance trails off after a huge inflow of new clients. The fund’s historical returns are great on paper, but most investors get something far less.

The average investor tends to exhibit two main behavior flaws that really hurt their performance. They tend to think too short-term (selling investments too soon) and they tend to try to time the market. Trying to time the market is especially hard these days. We all know that predicting the market in the short-term is nearly impossible. The last couple of months was a great reminder of this. Who would have guessed the market would have rallied over 25% during a period of horrific unemployment and a shutdown in the economy. Trying to time the market recently would have been frustrating. The two behavioral traits are something to keep in mind before doing anything. And more reason why the best course of action is usually to do nothing.

To combat these inherent traits in all of us, it is important to develop a comprehensive investment process. A process that is tax efficient, low cost, and durable for the good times and rocky ones. While we have several strategies across Apriem, most of you should have seen some steady flow of trade confirmations over the past few months. Probably more than you’re used to. We weren’t trying to time to market or hit the bottom. Our investment process led us to more opportunities that we were able to jump on. Most have performed quite well but it is too soon to tell. We measure our success over years, not months. In the meantime we’ll stick to our process. We believe it will continue to yield results over time. Hopefully sharing our process will allow you to combat that behavior gap in all of us.