Most Americans are familiar with the term bankruptcy, especially with current headlines making it seem like a well-known company is going out of business every day. However, filing for bankruptcy is not as straight forward as it might seem. Did you know that there are 6 different chapters of bankruptcy? They can differ by individual and company, farm workers and non-farm workers, and even one for cases involving foreign debtors.

Generally, when people hear that a company is filing for bankruptcy most will think the company is throwing in the towel. However, in practice, this is rarely the case. In fact, most large companies will file for what’s called Chapter 11 bankruptcy, or more frequently known as the reorganization bankruptcy. This type of bankruptcy filing focuses on reorganizing the corporation’s debt and formulating an operational restructuring plan to revive the company’s financial health. The restructuring plan can vary from cutting expenses to liquidating certain assets like closing retail stores, shutting down warehouses, or divesting business segments. The second most common type of bankruptcy is Chapter 7 which focuses on the full liquidation of a company’s assets to be paid back to investors. This is determined by a set order of precedence depending on whether the investor is a stockholder or a bondholder. Typically, the first ones paid are those who own debt secured by the company’s assets, then holders of unsecured debt, and lastly the common stockholders who rarely get a piece of the going-out-of-business pie. However, for the purposes of this article, we’ll be focusing on Chapter 11 filings since it’s most applicable to large public companies that have the resources and capital to reorganize.

Since March, when stay-at-home orders were first implemented across the nation, we’ve seen a pickup in bankruptcies being announced. Specifically, in the hard-hit sectors that have suffered the most from the quarantine: retail and energy. Big retail names that have filed so far include J. Crew, J.C. Penney, Neiman Marcus, and True Religion Apparel. High profile energy names include Whiting Petroleum, Diamond Offshore Drilling, and there’s even talk of Chesapeake Energy preparing Chapter 11 filings. While Covid-19 might have forced these companies to file for bankruptcy now, they had long been weighed down by their debt load prior to the pandemic. Although, there is a similarity between all these companies, and that’s that each of them is filing for Chapter 11.

Bankruptcy doesn’t have to spell the end for a company. Plenty of well-established firms existing today had filed for Chapter 11 bankruptcy once, or even twice, before. Prior to the pandemic, chances are you probably booked a flight with one of them during and years after they declared bankruptcy. Just to name a few companies that recovered from Chapter 11 includes American Airlines (2011), Delta (2005), United (2002), Marvel (1996), Apple (nearly filed in 1997, but bailed out after Microsoft bought a $150 million stake), and American Apparel (2015 & 2016).

In addition, findings in a study conducted by Senator Elizabeth Warren, former presidential candidate and former Harvard law professor specializing in bankruptcy law, along with another bankruptcy law expert back in ’09 drew a point that companies that file for Chapter 11 should not be looked at under the same lens. This is because companies can file at drastically different levels of financial distress. Some may be taking a shot in the dark, while others can have a legitimate plan to reorganize. While the success rate for companies that file for Chapter 11 is relatively low (estimates vary between 10-20%), Warren found that when isolating cases that could present essentially any viable plan of reorganization, the success rate grew to more than 70%. Chapter 11 doesn’t just take in the “ailing patients”, but also looks at the “corpses” as well. The point here is that any company facing bankruptcy, if they can produce a reasonable plan for reorganization and have the means, has a fair chance of regaining its footing.

Seeing multiple companies declare bankruptcy could have indirect short-term consequences as consumers and businesses become more conscious of their spending habits. Though, multiple companies filing for bankruptcy certainly doesn’t have to spell doom and gloom for the markets. Sure, companies that are filing today instead of yesterday is likely due to the pandemic, but many of these companies were already stressed financially prior to Covid-19. Below is a chart that illustrates the relationship between the number of U.S. companies that file for bankruptcy annually (blue) versus the annual percentage returns on the S&P 500 (orange). So, what is the relationship here? Well, there isn’t one and that’s the point! This chart shows that companies going bankrupt doesn’t have to be a signal of bad news for the markets. 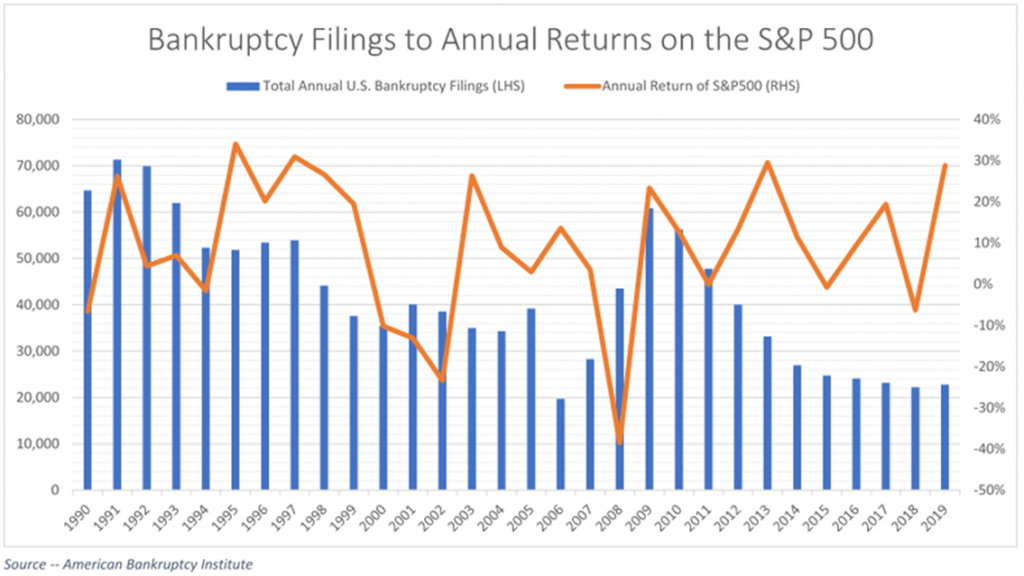 Just as sure as the sun sets, and as sure as economies go through ups and downs, it’s a common occurrence in the business life cycle that some companies will inevitably go bankrupt as industries change, competitors take the lead, and newly formed businesses grow. During this time of an increasing number of bankruptcies, we will continue to see more companies file for Chapter 11, but it’s unlikely that all of them will fail to make it back on the other side of this.

As it always does time and time again, the American economy will recover. And the companies best suited to come out of this in good shape are the ones with solid financials. That is why we not only look at companies we see trading at attractive discounts, but also have the financial footing to weather prolonged strains to the economy.

As always, please reach out to your wealth manager if you have any questions. Stay safe everyone!