Last week was a tumultuous week to say the least. Wednesday, the Fed released minutes from their April meeting where some officials proposed the idea of discussing rolling back its bond purchases in future meetings. Let’s take a step back for a second. As we know, during the Fed Committee’s meeting last month, the federal interest rate remained unchanged, and the rhetoric continued to surround no plans on making any changes soon. While the Fed minutes did include conversations of possibly dialing back asset purchases at some point, it was only about “discussing” that plan. In addition, members would only begin discussing a plan once they’ve seen significant progress towards the Committee’s goals (low unemployment & stable prices). The vagueness of the statement was very much the intention.

A traditional reaction for the markets would have been with a selloff, but last week the markets had their hands full with the limelight on stocks benefiting from reopening and cryptocurrencies taking substantial hits due to tweets from Musk and Chinese regulatory authorities. Economic data released last Friday also showed continued growth in manufacturing reflecting the reopening trend. Although, the recurring concern for many investors continues to be inflation, and rightfully so with the data we have been seeing. One issue might be in the interpretation of that data.

We learned this month that headline inflation, referred to as the Consumer Price Index (CPI), rose 4.2% for the month of April compared to April of 2020’s reading. However, as Ben mentioned last week, headline inflation isn’t necessarily the best measure for gauging a holistic view of the change in prices. For one, CPI gives larger weights to certain items that are more frequently purchased by consumers. A rise in gas prices will have more of an impact on CPI than a rise in the price of something not as frequently purchased, like tires. CPI also looks only at out-of-pocket expenditures on purchased goods and services, and excludes any other expenditures not directly paid by the consumer. One significant example of this is employer-provided medical insurance. These two factors play a significant role in why the Fed prefers to look at Personal Consumption Expenditures (PCE) which determines weight by what businesses are selling versus what consumers are buying (weight) and includes a wider range of data in its measurement (scope). Below shows the impact of factors that explain the divergences between CPI and PCE with scope and weight being the largest contributors.

The Fed has two primary goals; best known in the industry as the Fed’s dual mandate. This dual mandate stipulates the Fed’s goals as targeting price stability, for which the Fed uses PCE as its primary inflation gauge, and maximum sustainable unemployment. Regarding unemployment, the most recent reading for the month of April reflected negative sentiment as the number of new jobs added were largely under expectations paired with a slight uptick in the unemployment rate to 6.1% (still above pre-pandemic levels of slightly below 4%). Overall, economists are fairly mixed on when they think the Fed will slow purchases. From a Bloomberg survey taken in the middle of April, nearly half of economists are expecting the Fed to announce plans to taper asset purchases in the 4th quarter of this year. 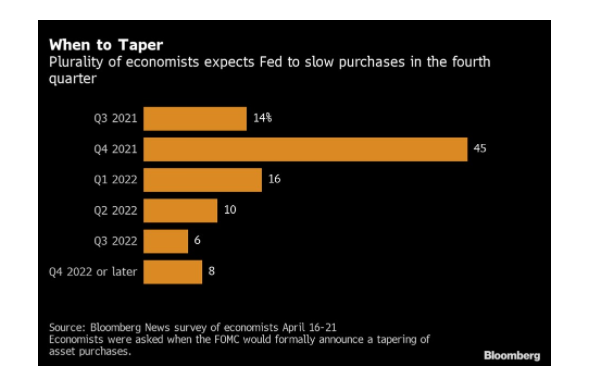 While the message from the Fed was left open ended, it was very much intentional. The Fed seems to be taking a gradual process in conveying the message of tapering; likely to avoid reliving the 2013 Taper Tantrum. More transparency leading up to tightening policy is a good approach, but whether this will keep the markets from making any sharp reactions remains to be seen.

As always, please don’t hesitate to reach out to your wealth manager with any questions you might have.