We hope everyone is safe and healthy. Today marks eight weeks of nation-wide quarantine and it appears these efforts have paid off. Some of the hardest hit areas are reporting a significant drop off in new cases and many less affected states are beginning to re-open. Unfortunately, the positive news is being tainted by the negative, which has occurred time and time again throughout this pandemic. The negative is the economic fallout we have experienced in the economy, as businesses large and small have been forced to shut their doors and let go of employees. The government stimulus packages seem to be having a mixed impact, however it will likely take several months before we know the true effect.

Despite the uncertainty and turmoil in the real economy, markets have fared quite nicely. The S&P 500 has rallied by roughly 28% since the March 23rd low and is trading in a much more stable manner on a day-to-day basis. It’s nice to show up to the office and not see trading halted in the first hour of the day! Nevertheless, a high degree of uncertainty still remains and this is not the time to rest on our laurels. It has been quite a remarkable rebound though and it has left investors searching for a cause. How could we lose a fifth of our nations jobs and watch the stock market rise by such a large amount? Intuitively it doesn’t make sense and many pundits offer a range of different reasons. Some say it’s the Fed propping up the stock market. Others say its due to the market forecasting a ‘V’ shaped recovery. There’s no way to know for certain and all we can do is stick to our process and maintain sound judgement.

While we pride ourselves on our disciplined, process-driven approach to investing, it is fun to dip our toes in the sand on this topic and attempt to explain the cause. As you recall, we mentioned last week that we’re in the middle of corporate earnings season, a time for investors to dig into the performance of individual companies. The season lasts roughly a month and a half, as different companies take their turn reporting. Last week was the ‘Big 5’ (Apple, Amazon, Facebook, Google and Microsoft) a group of companies that always seem to have a target on their back for a host of different reasons. What we consider to be the most important reason is the fact that their combined market capitalization (Their total number of shares times their share price) makes up 20% of the S&P 500 index. Remember, the S&P 500 is a market-capitalization weighted index, which means the market capitalization of each company determines its weight in the index and therefore it’s influence on index performance. When digging into these reports, we learned that the ‘Big 5’s underlying businesses have done well despite the pandemic and its due to the resiliency of their business models. All five are primarily software-based and their revenues and expenses have been hardly impacted by the severe drawdown in economic activity. Given this notion and their weight in the S&P 500 index, could this be why the S&P 500 has rebounded so nicely despite the deterioration of the underlying economy? It’s definitely a theory worth poking into. In fact, when you compare the performance of the S&P 500 to other U.S. based indexes that track stocks, there is a striking difference. The first index we have used in our example is the S&P 500 Equal Weighted Index, which represents the same 500 stocks in the S&P 500 at an equal weight – not based on market capitalization. The second is the Russell 2000 index, which tracks the 2,000 smallest publicly traded corporations in the U.S. While all three were constructed with different objectives in mind, they are clearly not created equal when it comes to reflecting the underlying conditions of the economy. As shown in the chart below, the S&P 500 (blue line) is down 8.95% on the year, while the S&P 500 Equal Weighted Index
(orange line) and Russell 2000 (red line)are down 18.47% and 22.74%, respectively. Given that the S&P 500 is the most widely used proxy for the U.S. stock market, this may be why we are experiencing such a disconnect between the stock market and the real economy. 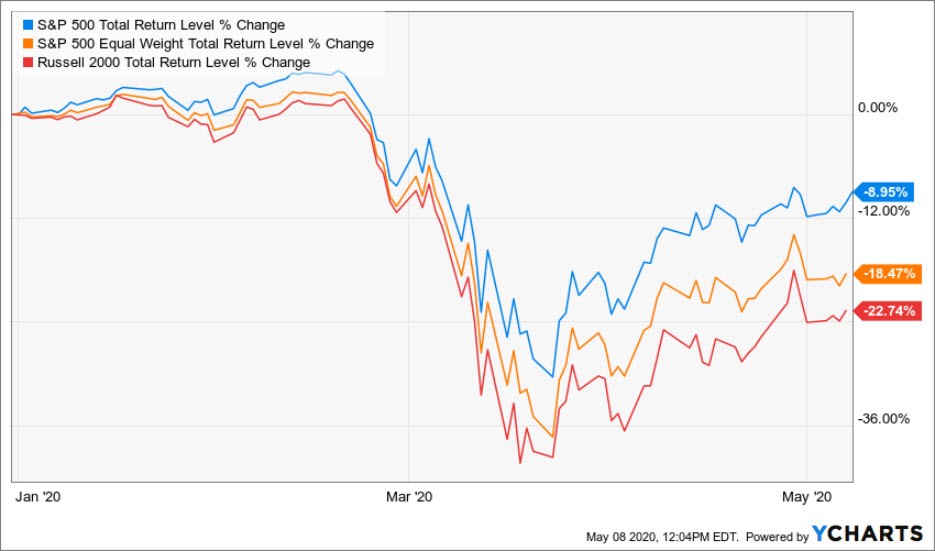 It is important to note that this disconnect has not always been the case, as the composition of the S&P 500 has changed drastically over the years. For example, back in 1977, the top 5 companies, who also collectively held a 20% weight in the index, were AT&T, Exon, General Electric, General Motors, and IBM. Clearly, times have changed and the ‘Big 5’ of the past were much more linked to the real economy compared to the ‘Big 5’ of today. This leads us to conclude that the S&P 500 may have been a solid barometer for the underlying economy in the past, but that reputation is in question today. On a second note, this observation provides proof that the markets are constantly changing and it is not wise to buy and hold a few companies just because they are big and popular. By following that strategy in the past, there would surely be wild ups and downs and most investors would not be able to stomach the hysteria. To make this point clear, this article is by no means a recommendation to put all your money in the ‘Big 5’. Yes, they have done well, but their current place in the S&P 500 index is purely a structural one, it’s not to say they will be the ‘Big 5’ forever.

At Apriem, we follow a consistent rules-based approach, where we look for high-quality U.S. businesses with sustainable competitive advantages, that are trading at a significant discount to their underlying value. The ‘Big 5’ are very high quality and there’s no questioning their competitive advantages, but we would not buy them all today, since they do not meet the second half of our equation. The second half is to buy with a margin of safety – a significant discount to their underlying value. This is the factor that is often overlooked but can sometimes play the biggest role in performance. When buying with a margin of safety, we not only put ourselves in position to capture more upside, but we protect our principal in the event the underlying business changes. It’s a return enhancer and risk-management tool wrapped in one, if used intelligently.

As always, we appreciate your relationship and we look forward to our future together beyond this pandemic. Please reach out with any questions or concerns. We’re here to serve.