It was another big week for corporate earnings. Many big-name tech companies reported results, but it was social media networks that took center stage. At the beginning of the week, former President Trump announced that he is starting another social network, his second one since he left the White House. Plans for the technology behind Truth Social are still in the works, but it looks like he is coming at this aggressively, securing financial backing through the red-hot SPAC market. Social media is a tough business. Not only does it require a tremendous amount of money, but it also requires even more operational know-how.

Just ask Facebook’s founder and CEO, Mark Zuckerberg. After reporting their latest quarterly financial numbers (growth was a little disappointing but the $9.7B in reported free cash flow marked a new record), they announced they are rebranding themselves. Apparently, Zuckerberg is looking beyond Facebook and its family of apps like Instagram and WhatsApp. He is looking ahead and seeing a virtual future in the “metaverse”. With that in mind, he has renamed his company “Meta” with a new trading symbol of “MVRS”. It will begin trading under the new symbol on December 1st. Facebook, Instagram, and WhatsApp will still exist as a division within Meta. So will his new passion, Facebook Reality Labs.

It is easy to dismiss all this as an attempt to evade all the bad press Facebook has been getting but it looks like this has been in the works for a while. We expect Zuck to eventually appoint a new CEO of Facebook so he can spend more time pondering life in the metaverse. It sounds like he is focusing his attention on different areas; billionaires have short attention spans and often leave the operational details to others (some billionaires leave the planet entirely).

Aside from Facebook news, it is noticeable that we are entering the back half of the earnings season. A little over half of the S&P 500 have reported earnings, and things are pretty good. Of course, there are a lot of obstacles for companies as we go into the final months of the year. Two of the biggest issues companies have been citing during this earnings season are supply chain issues and finding qualified employees. No surprise there. But it looks like corporate America has never been more prepared to face these challenges. Companies continue to see fat profit margins, the fattest in decades. 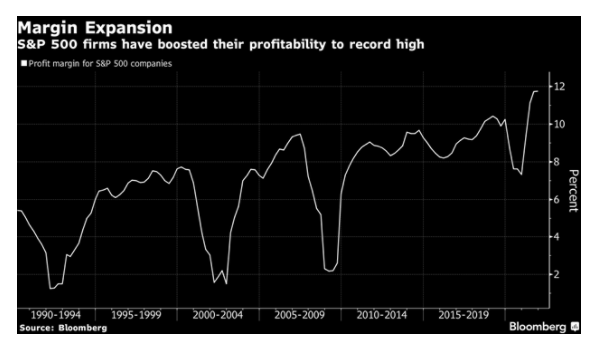 We’re feeling some of the growth pains here at Apriem too. As some of you may know, we have hired a few new staff members. Finding great people has been a challenge, but we found a handful of great people to help us serve you. Hopefully in the next few months you will all get to meet Cole, Andrew, & Kenneth. Unfortunately, the most challenging part has been finding technology supplies for our new staff like laptops and monitors. Our vendor has been warning us of shortages and delays across their supply chain, which has led to substantial price increases. Unfortunately, it’s not just prices that are going up. While prices have risen modestly (“price inflation”), time inflation has been a bugger. And as they say, time is money.

Speaking of inflation, join us in our next virtual event titled The Permanent Problem With Transitory Inflation where Jose Rendon and I debate the impact of today’s current inflationary pressures and what it could mean for stocks, bonds, and your financial freedom. The event will take place on Thursday, November 18th at 1:30 P.M.