Many of you that read our weekly letters will remember I have a COVID garden. I have always had a small patch of dirt in my tiny backyard. I really picked up my efforts during the COVID lockdowns. I have continued my hobby all throughout the lockdowns. Right now, I am seeing some fruits from my fall garden, primarily lettuce and kale. With all the talk about high inflation, I thought I should break down some of my costs; mainly soil, seeds, water, and my time. I never started this garden to feed my family fully. My usual harvest is paltry. What used to cost $100 a year to grow $10 in fruits and vegetables, now costs me $150 to grow $20 in fruits and vegetables. I’m not sure what’s better. I guess it’s a matter of perspective.

Prices are rising, no doubt. From simple things, such as lettuce and gasoline to bigger, “durable” goods like computers and refrigerators. Last month’s inflation numbers showed that prices have been rising at their fastest pace in thirty years. Despite that, we are nowhere near the hyperinflationary times that some might have you fear. Nevertheless, smart guys like Twitter & Square CEO Jack Dorsey and Michael Burry of “The Big Short” fame, claim it is on the horizon. But the hyperbole of hyperinflation is exaggerated. They are meant to get headlines and clicks.

Let’s remember the most recent bout of hyperinflation that most are talking about, the Weimar Republic. Due to numerous pressures, including reparation payments, Germany was hit with a decade of hyperinflation. The currency of Germany, the Mark, was destabilized, resulting in a massive revelation. Inflation spiked in the short term, and it didn’t end up being “transitory”. Over the course of the decade, the German Mark was devalued by over 100 billion percent. 100,000,000,000%. To put that in perspective, the most recent inflation numbers from the United States were 6.2%. And that was the highest reading in decades. Over the last five years (a period that we use to evaluate our outside managers), inflation has been around 2.5%; still sound of what we use for our financial planning analysis.

Inflation is a matter of perspective; it hits everyone differently. Standard measures of inflation like the Consumer Price Index (CPI) may not reflect how inflation impacts you (see below). Notice that the biggest component is housing. For many Americans that own their home, it doesn’t affect you nearly as much. The second biggest part of inflation is transportation costs. Again, that’s a matter of perspective too. More and more Americans are working from home, saving money on gas and eliminating the need to commute to work. However, for those that do have to drive into the office, you will surely notice the sky-high gasoline prices. Car prices themselves continue to be an issue. One of our staff members, Andrew, is in the unfortunate position of needing to buy a car, new or used, he will be in quite a bind. 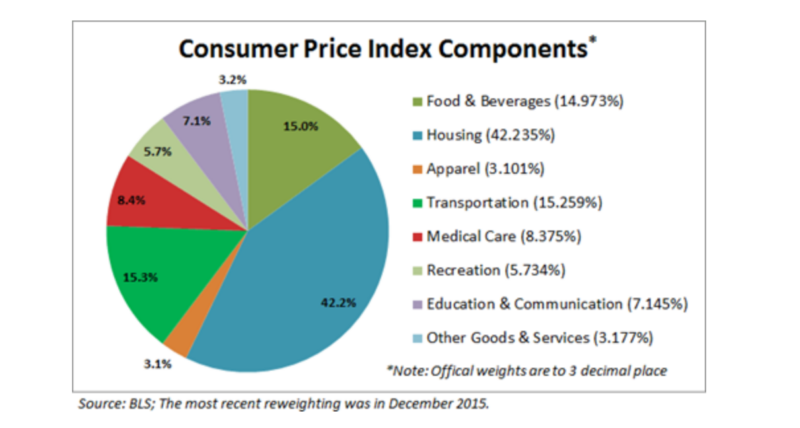 Pricing power for sellers is good. It’s just bad for buyers. It wasn’t that long ago that the market was fearful of deflation. There was the Fed’s bogeyman that we didn’t know how to deal with. What do we do in a world of negative inflation and then negative inflation rates? A little higher inflation might be a good thing for many of the companies we own. They are net suppliers in this global economy, and we think they have unique products that command premium prices. Inflation is on the rise and isn’t as transitory as we all had hoped. It might stay around for a while. But hyperinflation? The hyperbole of hyperinflation is just for the headlines.

Speaking of inflation, join us in our next virtual event titled The Permanent Problem With Transitory Inflation where Jose Rendon and I debate the impact of today’s current inflationary pressures and what it could mean for stocks, bonds, and your financial freedom. The event will take place on Thursday, November 18th at 1:30 P.M.