My kids really drive me nuts sometimes.  Last week my son, Connor, got caught doing something he shouldn’t have been doing.  Caught red handed, embarrassed, and extremely tired, he started lashing out at my wife and me.  With the heated emotions, my wife and I got into it; arguing about how to deal with him.  We knew what the problem was, but we disagreed on the best course of action.  Of course, after a few minutes we regained our senses and realized when we fight amongst ourselves, we are not accomplishing anything and not working toward our shared goal.

As we get closer to tomorrow’s historic U.S. election, I would like to get up on my small soapbox to remind everyone about a few things.  First, voting is a privilege and one that too few Americans avail themselves to.  As a son of immigrants, both my parents never had the opportunity to vote in their home countries.  They came to America for that opportunity.  Second, the election results we will be getting over the next few days and, potentially weeks, is not a winner or loser type of competition.  Elected officials are given a responsibility to take care of America and its constituents.  I truly believe that most politicians are honorable and just.  Choosing a life as a civil servant to help their community, to serve their community.

While we certainly differ in our approach to what we feel is best for our community and nation, we should never forget that your political “opponent” is just as patriotic as you are.  Just as my wife and I would sometimes disagree, we both care deeply about our children.  And just like the front-line workers Rhonda thanked in her President’s message last week, we are reminded that there are not red fire fighters and blue fire fighters fighting red and blue homes.  There are no red states and blue states, or red people and blue people.  We’re all a mix between the two.

Like many of you, we will be watching the election results tomorrow night.  The issue I wrestle with the most is what we should be doing with your portfolios.  Even if I knew with 100% certainty who was going to win, what should we do with it?  Looking back to the summer of 2016, even if I knew Donald Trump was going to pull off his upset, what would have I done then?  The prevailing wisdom during his run in 2016 was that President Trump would be hard on immigration, a negative for the technology sectors that takes such use of the H-1B visa program.  Trump was also very pro-American energy, oil companies and banks.  Maybe these companies would see a boost.  Yet four years later, big tech turned into huge tech.  And those oil and financial companies?  Two of the worst performing sectors in the last four years. 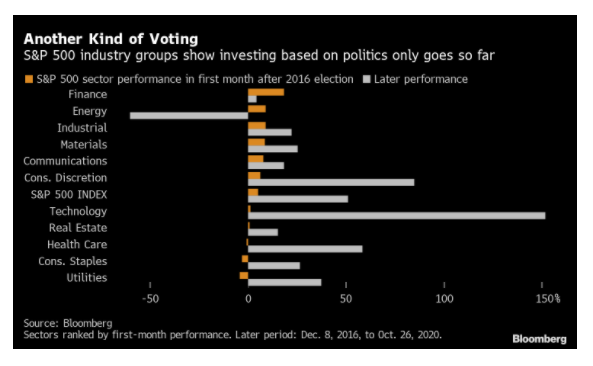 I cannot say I fully support all the ideas from my party, the same party to which I have belonged since I turned 18.  But I also cannot say I fully condemn all the polices of the other party.  Like my argument with my wife, it’s important to remember our similarities, not differences.  Because our goals are the same; we want the best for our son.  Just like how the 537 elected officials in Congress and the White House want the best for America.  And while we may differ along the path, the end goal is the same.

Our goal at Apriem continues to be stewards of the capital you have entrusted us with.  We continue to scour the markets for high quality companies to invest in, and we know that these times of crazy market volatility, much like in 2016, can present a feasting ground for opportunities.  But it won’t be this week alone.  New legislative agendas will be rolled out over the next few months, and these new initiatives have the potential to largely impact specific companies as well as whole sectors.  But as these various elected officials sort out their priorities, we should do well to remember that they all are doing it to make America better.

As always, please don’t hesitate to reach out to your wealth manager or myself with any questions you may have.