My wife, Wendy, and I are huge fans of California’s central coast. She grew up in a small coastal town called Cayucos. We’ve always had a fondness to the small towns dotting California’s scenic coast. We recently took a drive up the coast to visit Big Sur. Usually, my wife and I aren’t keen on doing anything too fancy for our anniversary, but I got an itch almost a year ago to do something. I got stir crazy in the heat of COVID and needed to get out of town.

I’ve never been to Big Sur. I was stunned to see how different it was compared to other parts of the central coast. Unlike San Luis Obispo or Santa Barbara, Big Sur’s terrain is much harsher. The lush, beautiful forest dramatically opens up to the cliffs along the ocean. This harsh terrain is probably why so much of the area has been left untouched and undeveloped.

The third quarter ended quite harshly as well. Investors have been hit on multiple fronts: worries about rising interest rates and politics. Rising interest rates have scared off investors but that is likely a temporary issue. There have been plenty of times when stocks continue to do well while interest rates rise.  Most recently from the summer of 2016 through the winter of 2018. Yields on the 10-year Treasury doubled, rising from 1.3% to over 3%, but the market continued to run.  The S&P 500 was up over 30% in the time. Even the tech-heavy NASDAQ Composite did well. It was up over 60%. We continue to think rising interest rates are a healthy sign that the economy is on the mend and going in the right direction.

On the political front, our elected officials continue wrangling over numerous topics from the debt ceiling, infrastructure, social spending and how to pay for it all. Most concerning to us and your portfolio is the likely increase in corporate taxes. It is a near certainty that corporate taxes for many American companies will be on the rise. Not the harsh increase the Biden administration first proposed but higher, nevertheless. So far estimates call for the S&P 500 to earn about $215 per share in profits in 2022 (a record level) – I expect a few dollars be shaved off due to higher corporate taxes. Combined with higher wages and other costs, companies will have a lot of higher expenses to contend with over the next few years. Thankfully large American companies that the S&P 500 represents are well positioned. Even before COVID, profit margins for large American companies were quite fat, touching over 10% (a record level). Post-COVID, these profit margins are even fatter now. 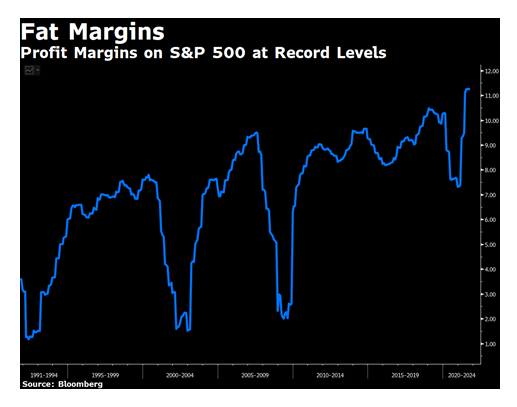 The third quarter didn’t end on such a good note, but things aren’t that bad either. American stocks are still only a few percentage points from record highs. And while things might continue to get rockier, we enter the final quarter of 2021 with cautious optimism. Rising taxes and interest rates pose short-term waves for markets but they shouldn’t be too much of a concern to derail this bull market. Markets usually get more volatile during periods of drastic changes. But the upcoming changes don’t deter us from our optimism for the overall economy.