The narrative that has begun to manifest in the current market environment is that of a “window of weakness”, as PIMCO puts it. You can interpret this as heightened uncertainty in where our economy is headed. What’s outside our point of view from the window? Is there a recession around the corner? Or will the economy continue to grow?

Amid what has been an overall shaky year for the markets, U.S. stocks ended September roughly where they started. Last month might have seemed uneventful, had you just looked at the beginning and end results, but there were actually quite a few developments. In the middle of the month, the Federal Reserve cut rates once again as it had back in July. However, stock markets reacted very little to this news, indicating that investors had expected this course of action from the Fed. We saw turmoil in the global landscape begin to trickle down to the American consumer. Over the past year we’ve seen the effects of the trade war in areas of production, with manufacturing indicators trending downward, and now we’re beginning to see this trend find its way into the services sector as well. And to add further political uncertainty, Democrats launched a formal impeachment inquiry against President Trump. While there were many different factors at play this month, one thing holds true: bad news continues to be good news. Although some U.S. indicators are pointing towards a path of slower economic growth, investors are expecting the Fed to continue its cycle of rate cuts with the hopes of stimulating the economy. 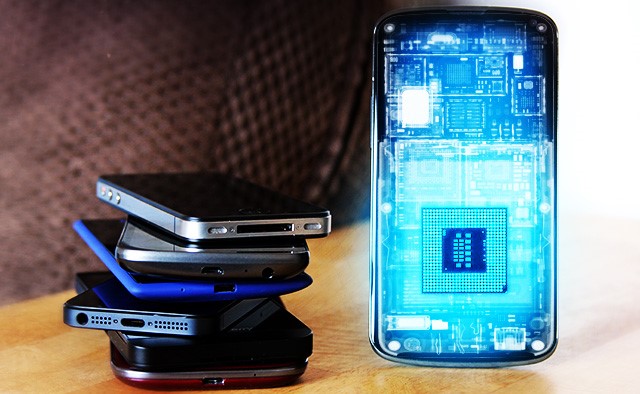 In contrast with U.S. manufacturing, which has been hovering near contractionary levels for the past 2 months, the services sector continues to grow. This is important to note since the services sector accounts for roughly 70% of the U.S. economy. When differentiating between services and manufacturing you can think about a telecom company that offers a service plan to its customers (AT&T), versus the chip manufacturer that provides the computing capabilities for the telecom company’s products (Samsung). Thus, with the services sector still sustaining moderate levels of growth and unemployment being at its lowest since 1969, the American consumer remains relatively strong. But with these conflicting signals in the U.S. economy, as well as heightened growth concerns in the global economy, the Fed chose to lower interest rates last month.

Now let’s shift from the domestic environment and turn towards what is happening overseas. Global tensions have been high since the trade war started in June of 2018, but to what degree has this affected U.S. investor behavior? The chart below illustrates the relationship between U.S. stock market volatility (vertical column on the left) and the change in global economic policy uncertainty (vertical column on the right). Since 1997, changes in global uncertainty have been closely correlated with fluctuations in the U.S. stock market. However, if you look at post-2015 you can see that there has been very little correlation between the two. In fact, volatility has been low relative to historical periods. This presents two opposing questions: Are we due for even higher volatility to match global uncertainty like we’ve experienced in the past? Or is there a reason for why U.S. market fluctuations haven’t been as sensitive to foreign events? 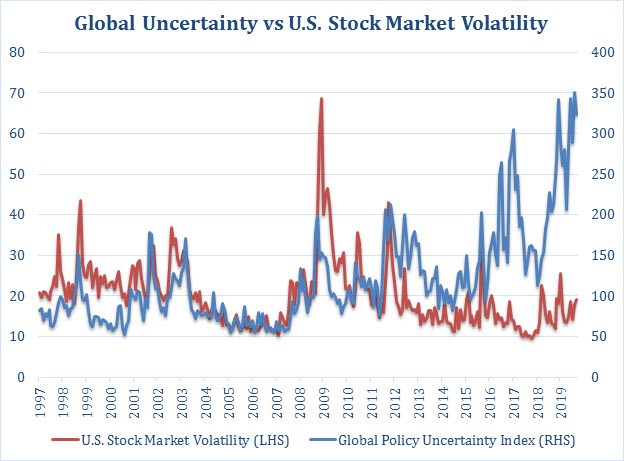 On another note, we saw some developments on the trade front. Trade tensions between the U.S. and China had eased slightly after China agreed to purchase some U.S. agricultural products, and Trump agreed to delay the new round of tariffs by another month. While a trade deal did not materialize last month, we saw that both sides aren’t looking to antagonize the other. This could present another step toward coming back to the negotiating table.

At Apriem, we interpret this “window of weakness” as seeing only one part of the picture. While one part of the picture (negative interest rates, trade war, and other global risk factors) does give us reason to expect heightened volatility going into 2020, we’re not yet convinced that a recession is on the horizon.