A seismic event happened this past week. No, not the 4.6 magnitude earthquake that rattled us Friday night. While a little jarring to my kids, those of us that grew up in Southern California know that a 4.6 is a minor rattler. Given how 2020 is going, a 4.6 seems quite an afterthought, no?

I’m also not talking about the death of Ruth Bader Ginsberg. I tried to explain to my kids who she was. But trying to explain the legacy of the Notorious RBG to them was tough. Especially to my seven-year-old daughter who has the attention span of, well, a seven-year-old. It’s difficult for them to imagine the struggles that generations before us had to deal with. The death of Justice Ginsberg is going to kick off an amazing political firestorm. And with less than forty-five days before the election, the stakes could not be higher.

The seismic event that I’m talking about is the Federal Reserve’s continued message that a new sheriff is in town. Chair Powell is now explicitly telling markets to expect low interest rates for longer. Even if inflation does shift higher, it’s going to need to be substantially higher to make up for all the low inflation we have been getting for years now.

The Fed predicts that America’s economic recovery will be slow, but they will be here to help. The uneven recovery was punctuated with the weak retail sales data last week. In addition, Americans are pulling back on spending after the expiration of the jobless benefits.

As the Fed continues to grapple with how to deal with an anemic American economy, they are finding out it’s not good enough for them to just keep short term interest rates low. Powell is now clearly signaling to markets that they’re going to keep interest rates low for a while. It looks like he’s trying to prevent another taper tantrum we saw back in 2013 years ago. At the time, the Fed had signaled to markets that the economy had recovered from the financial crisis, so they were looking to start cutting back on stimulus. Interest rates on the benchmark 10-year U.S. Treasury nearly doubled that summer and threatened to derail America’s recovery.

Powell was in his freshman year on the Board then and has obviously learned some lessons. He explicitly told markets he’ll keep rates low, even when the economy begins to recover. Keeping rates low for longer is going to have consequences, intended and unintended. Fed haters and supporters will no doubt be given more ammo in the coming years.

Despite the Fed’s commitment to keeping rates low, equities continued to decline today after last week’s losses. Specifically, technology stocks are leading the way down as investors pull away from risk assets. All this right before we enter October. Mark Twain famously wrote that “October is a peculiarly dangerous month to speculate in stocks.” Especially in a presidential election year. The Stock Trader’s Almanac noted that the market fell on average about 1% in the October before a presidential election. The brilliantly astute author also noted that “July, January, September, April, November, May, March, June, December, August, and February” were dangerous too. 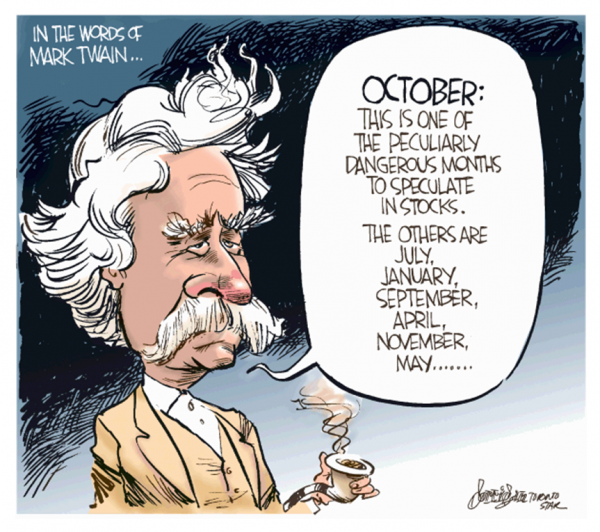 The current market moves seem to be a normal market correction after a huge summer surge.  Much of the fundamentals and economic data points that were true a few weeks ago haven’t changed much.  Declines are not only healthy but inevitable.  We continue to monitor our Wish List of great companies we would love to own.  We are still quite a bit away from seeing more opportunities in the market, but we will be ready to pounce if the opportunity arises.