Well, everyone predicted it. To no one’s surprise, equity markets are having the typical pre-election jitters. The increased volatility before the upcoming presidential election is the one thing in 2020 that many actually did predict. The market has been taking some hits for four straight weeks, and we are about ten percent off the highs from early September.

Over the next thirty days before the election, we will be digesting a large amount of data points that will inform the mind of voters (if they haven’t already been made). First off, on Friday we’ll be getting more data into the state of the job market. Then shortly afterwards, earnings season will kick off. Discussions about another round of stimulus continue to be tossed around headlines. Passing anything in either legislative branch seems to be on pause for now. All of the Senate’s energy will be on the confirmation of Judge Amy Coney Barrett to the bench.

The main event of the week, of course, will be Tuesday’s debate. I’m really hoping Michael Buffer will be there to open the event with his trademark, “Let’s get ready to rumble!!”. As if the election rhetoric hasn’t been heated enough. By far, the question that I continue to get from our clients is regarding the election and their portfolios. The two candidates we are left to choose from have their own merits and issues, including from a market standpoint. Their stances toward various sectors like healthcare, energy, and financial services, couldn’t be starker (they seem to agree on tech but for different reasons).

By all measures the race is close. Closer than what many polls suggest. Of course, polls are subject to biases given how a pollster asks a question and how a respondent answers. Below is of live betting odds on the race where people have real money on the line. It’s still a very close race. 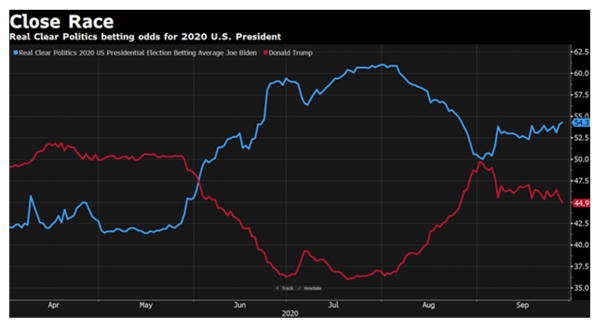 Although, even if we knew who the presidential election winner would be today, what trades could I make now to take advantage of that foresight? Unfortunately, trades based on politics rarely work out. Looking back at the Clinton and Obama administrations, they weren’t fans of the healthcare system. But under both terms, that sector did quite well.

When Trump won the election, many predicted a boon for his favorite sectors (eg. energy & financials). On the other hand, the technology sector was shunned. It had garnered the ire of the candidate, and now President, due to their high use of H1B visas for foreign employees. But after a month, those trades soon fizzed. Energy and financials have been two of the worst-performing sectors since 2016. And the tech sector? I think we all know how tech’s been doing.

The biggest scare to financial markets is Biden’s current plan to raise taxes on the rich to pay for programs for the needy. Don’t confuse this Robinhood type plan to the Robinhood traders I’ve been talking about all summer. Even if he wins, Biden will have a lot of hurdles to face before raising taxes. But if capital gains tax rates do increase, that would certainly spell doom for the markets. The last two times capital gains taxes were raised (back in 1986 and late 2012), the market did see a little short-term bumpiness. However, equity markets did resume their upward trend, and the bull market continued. Those sell-offs proved to be excellent opportunities to buy.

It’s quite clear that we continue to think that volatility is here to stay until the election. Just look at the market’s actions over the past week. Though, I do expect volatility to stay well past that, and the market is starting to agree with me. Current trading patterns estimate that the “VIX” (the market’s favorite volatility gauge) is set to stay high for the rest of the year, months past the election. I’m expecting big swings. These big swings in the market aren’t all bad though. Much like in March this year, a sudden sell-off can provide opportunities for us to jump on high-quality business at more favorable prices. And much like in March, we will continue to monitor our shopping list of great businesses that we would like to own. Over the next few months, I anticipate the volatility around the election will provide us with some new opportunities to capitalize on. Enjoy watching the debate. We’ll be watching the markets.