Tech stocks hit a bit of a pause last week after their furious August rally.  Unfortunately, that pain has spread to the broader markets too.  By most measures, August is usually a quiet month for equities.  A time when many families take their summer vacations and get in some sun before the school year starts.  Of course, 2020 isn’t like most years.  This August, equity markets around the world staged a historical rally pushing indices to record levels.

Thus, it came as a major shock to many when equities began falling apart last Thursday.  Companies of the Information Technology sector, ones leading the pack to new highs in August, suddenly found themselves leading on the way down.  The lack of an apparent reason for the selloff stumped many.  The bullish conditions that were in place a few days ago still exist.  Yes, some valuations were at eye-watering levels.  Chasing names like Apple (AAPL) and Tesla (TSLA) at such historically high levels was nothing new.  Investors had been chasing growth stocks for years now.  If valuations didn’t matter last week, for the Robinhood bunch, why would they matter now?  Truth be told, using valuations to time stocks is difficult at best.

It turns out that this time is wasn’t just Robinhood and his merry traders.  There have been rumors of a large options whale swimming around.  Someone has been taking a rather large bullish bet on tech shares.  Option activity had already been higher due to the post-COVID rally, but activity soared in the past two months.  The Financial Times claims that the Whale was none other than the shapeshifting tech company known as Softbank.  The FT reported that Softbank, the company that brought us WeWork, had been building up about a $4 billion options position in various technology companies.  On a leveraged basis, that represents about $30 billion in exposure.  Once news of the position broke on Thursday, traders took the opposite side of the trade, sending tech shares and Softbank down dramatically. 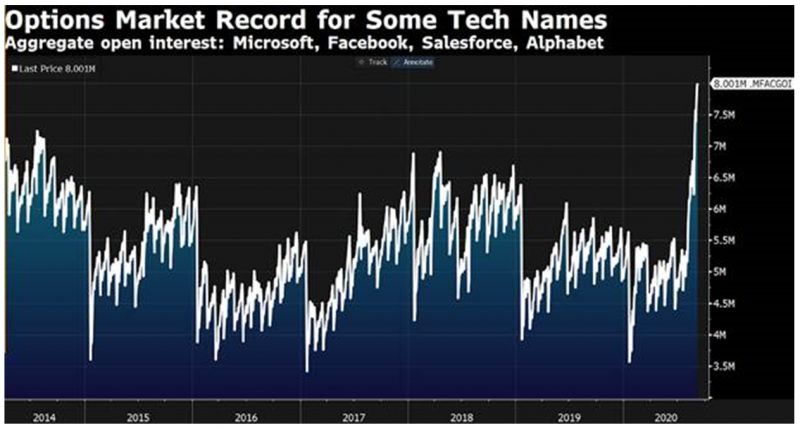 But is a $30 billion position really enough to distort the market?  It sounds like a large position, but given how large these tech stocks are it shouldn’t be enough to crater markets.  Apple’s market cap alone moved by $60 billion last week.  In fact, Apple’s market cap has moved by $60 billion almost every week in the last two months.  While a large position for Softbank, I doubt they’re the only reason tech stocks soared in August and fell like a rock last week.

Of course, this bad news seemed to trigger other bad news like a domino effect. On Friday, we learned that the S&P 500 snubbed Tesla (TSLA). It’s unthinkable that a $300 billion company isn’t in the benchmark.  Shares have been surging of late; it’s cars are tremendously popular.  Their car’s popularity (and surge in selling tax credits to boost their profits) have given the company its first full year of profitability.  Of course Musk is in good company.  The last company the S&P snubbed was Berkshire Hathaway.  I guess size isn’t everything.

And that’s the difficult thing about all this.  The markets are usually irrational, and seldom rational.  No one could have predicted the fall last week.  Although, no one could have predicted the huge run the markets made in August either.  On many occasions the markets can just drop for no apparent reason.  No real change to a company’s economic value.  The market sells and tries to find a justifiable reason, or a villain, afterwards.  Markets will always have this type of noise.

What we do know is that the economic recovery should be delicate, yet strong.  I know there is a lot of economic devastation out there, but many Americans have saved a tremendous amount of money in the past few months.  The cash is itching to go somewhere.  Be it into the new iPhone 12 that’s coming out, to improving your home, or into your Robinhood trading account.  But stocks have already priced much of this in. Not to say equities can’t still go higher.  As we’ve seen in the past, the bull can run for a lot longer than expected.  Though for now, we still don’t see too many new opportunities.  The S&P 500 is only back to where it was a few weeks ago in mid-August.  As such, we will continue to monitor our watch list of great businesses we want to own.